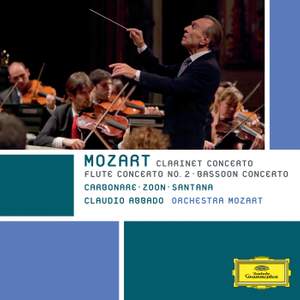 In the year of his 80th birthday, Claudio Abbado and his superb orchestra continue their Mozart celebration with critically acclaimed solo concerto performances.

The third of a three album series of Mozart wind compositions puts Claudio Abbado’s inimitable, refined stamp on this music of vigour, grace and beauty. Guilhaume Santana’s bassoon – mournfully and boisterous by turn – exploits every interpretive possibility in Mozart’s earliest surviving wind concerto, the Bassoon Concerto , K. 191. The arcadian chase that is the Flute Concerto No. 2, K. 314 proves an exhilarating and easy conquest of perfection by flautist Jacques Zoon and clarinettist Alessandro Carbonare spins tonal majesty out of thin air in the reflective Concerto in A, K. 622.

The second movement of the clarinet concert is known for its use in famous movie " Out of Africa " (1985) by Sydney Pollack (starring Robert Redford and Meryl Streep).

Carbonare plays the late Clarinet Concerto with pleasingly soft-grained tone and some well-conceived ornamentation...Zoon produces an equally mellifluous tone in his accomplished performance of the earlier Second Flute Concerto...The Abbado disc nearly represents the state of the art of modern-instrument Mozart performance and recording.

Carbonare produces a rounded, velvety tone, phrases immaculately and ornaments tastefully...[Zoon's] liquid tone and graceful phrasing and, crucially, sense of puckish mischief - not least in his cadenzas - made this, for me, the most wholly satisfying performance on the disc.

The performances are captured with clarity and warmth...If you are collecting this series, you may safely add this latest volume to your library. It should provide a great deal of listening pleasure

This is playing that would surely have appeased Mozart’s stated aversion to the flute...[in the Clarinet Concerto] Carbonare’s immaculate technique, mellifluous tone and aristocratic musical instincts...are given instinctive support by Abbado and his players. This is Olympian Mozart, a pleasure to hear from first to last.