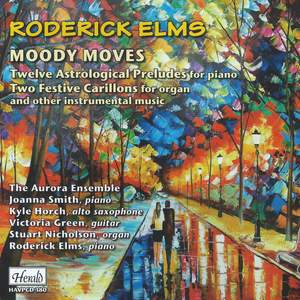 Twelve Astrological Preludes is a concert piece with six movements for piano and wind quintet. Originally conceived in 2005, the composer left it until 2011 when it became this work. Performed by the Aurora Ensemble , the music is quite Arnold-esque in its orchestration but with richer, more modern harmonies. Better known as principle accompanist to Rostropovich, composer Roderick Elms studied at the Royal Academy of Music and has made many recordings appearances on BBC Radio as a soloist.