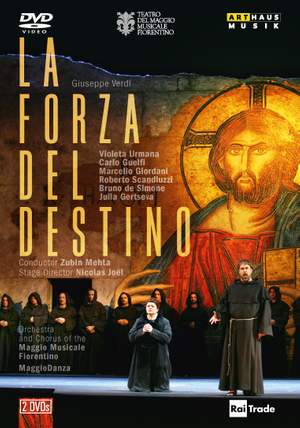 La forza del destino (The Force of Fate), premiered in St. Petersburg 1862, is one of Verdi’s most important opera compositions.

Its plot is complicated and combines a sequence of interlaced unfortunate strokes of fate. Donna Leonora is the centre of events, together with her brother Don Carlo di Vargas and her lover Don Alvaro.

The story was originally set in 18th century Spain, however the French director Nicolas Joël established the action in a slightly later period, in the time of the Empire, the early 19th century.

The 2007 performance at the beautiful Maggio Musicale theatre in Florence, conducted by Zubin Mehta, who is a frequent guest artist there, stars Violeta Urmana as Donna Leonora with Carlo Guelfi and Marcello Giordani as Don Carlo and Don Alvaro.

“The singing and playing are fantastic, and the production is faithful and unobtrusive. [...] To my mind this set now leads the field and takes its place as one of the great Verdi productions [...] A real classic.” MusicWeb International