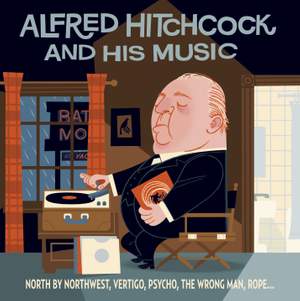 Alfred Hitchcock and his music

Herrmann, B: North by Northwest: Overture

Herrmann, B: The Wrong Man: Prelude

Benjamin, A: The Man who Knew too Much - Cantata -The Storm Clouds

Evans R, Livingston J: Que Sera, Sera (Whatever Will Be, Will Be)

Herrmann, B: Vertigo: Prelude and Rooftop

The master of suspense was well known for choosing and editing the soundtrack of his films very carefully, and these are rightly considered to be genuine masterpieces. This double album features the best of this deeply original musical universe; the pieces are remastered or presented as the orchestral suites approved by Hitchcock himself. The first CD is dedicated to the seven pictures made with Bernard Herrmann, while the second one features the other composers Hitchcock worked with; Herrmann himself: Dimitri Tiomkin, Franz Waxman, Miklos Rosza, Lynn Murray…