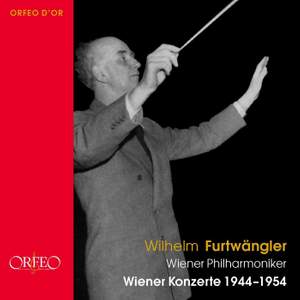 This is a set which will be or urgent interest to Furtwängler collectors and it should be explored by anyone wanting to hear a great conductor at the height of his powers … Orfeo has given us... — International Record Review, May 2013 More…

Furtwängler: Symphony No. 2 in E minor

After Berlin, Vienna was the music centre to which the conductor Wilhelm Furtwängler had the closest artistic connections. Under his direction the Vienna Philharmonic made a whole series of radio recordings that have now, for the first time, been carefully edited under the auspices of the Furtwängler specialist Gottfried Kraus and released by Orfeo on 18 CDs. The series commences with recordings from 1944/45, including one of Mozart’s g-minor symphony K550 in which Furtwängler demonstrates his clear sense of form from the very first bars. Beethoven’s third 'Leonore' Overture and an excerpt from Schubert’s 'Rosamunde' music complete our selection from this, the earliest of the recording sessions. Several works are to be found more than once in this anthology. Thus, Beethoven’s Eroica can be compared in an early version from 1944 and a later recording from 1953, just as Bruckner’s Eighth can be compared in recordings from 1944 and 1954. Beethoven’s Ninth Symphony is offered no less than three times here – from the years 1951, 1952 and 1953 – a work that surely no other conductor could make into such an 'event', an experience of universal import, as could Wilhelm Furtwängler. This was also true of his Brahms interpretations, represented here by the first two symphonies, the 'Haydn' Variations, the Double Concerto and the 'German Requiem', which is sadly only extant in an incomplete recording from 1951. This is, incidentally, the only time in this collection that we hear Furtwängler conducting the Vienna Symphony Orchestra. Besides Irmgard Seefried and Dietrich Fischer-Dieskau – two vocal soloists whom Furtwängler admired and engaged repeatedly – we can hear the chorus of the Vienna Singakademie on this recording.

They also sing in Bach’s 'St Matthew Passion': in a partial recording from 1952 and in the famous performance of 1954 that was shortened by Furtwängler himself, but which is here released in a restored recording based on the original radio broadcast, without the cuts that were later made by record companies. Here as elsewhere in this collection, the acoustic heritage of the Viennese radio stations of the time has been restored using the best possible technological means available today. Even collector’s items such as the Piano Concertos K365 and 482 by Mozart, with Dagmar Bella and Paul Badura-Skoda, have probably never sounded better since they were first heard in the concert hall. Hence justice is done to Furtwängler’s timeles” style of music-making that unites different epochs, ranging from Gluck’s Overture to 'Iphigenie in Aulis' to Mahler’s 'Songs of a Wayfarer' and Furtwängler’s own Second Symphony – a work that despite all its late-Romantic echoes succeeds in attaining originality and a considerable emotional impact. This universality of Furtwängler has not found its match to this day.

This is a set which will be or urgent interest to Furtwängler collectors and it should be explored by anyone wanting to hear a great conductor at the height of his powers … Orfeo has given us a Furtwängler set of considerable musical significance ... an engrossing experience.