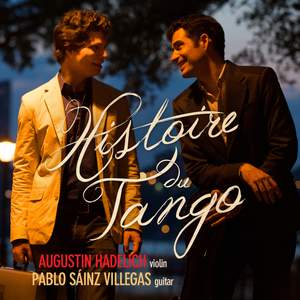 Paganini: Sonata Concertata in A Major

In a short space of time Augustin Hadelich has become one of the most respected and admired violinists of his generation. Two critically acclaimed and Billboard Classical Chart-topping releases for Avie, a string of major debuts with the likes of the New York Philharmonic, Boston Symphony, Cleveland Orchestra, Los Angeles Philharmonic, San Francisco, St. Louis and National Symphony Orchestras, and the BBC Philharmonic, multiple awards including an Avery Fisher Career Grant and a Borletti-Butoni Trust Award, have resulted in major media coverage in The New Yorker, The New York Times, The Los

Angeles Times, Philadelphia Inquirer, and classical-music.com, among many others, and an ever-widening and adoring fan base.

"Hand in hand with the intelligence of the programming go wondrous playing of the violinist Augustin Hadelich ...exceptionally compelling performances...a disc that cannot be recommended highly enough." - Gramophone Editor's Choice (on Echoes of Paris, AV2216)

"If a layer of surface noise were added to Augustin Hadelich's recent solo-violin recording on the Avie label, you might think you were hearing a virtuoso out of the Golden Age." - The New Yorker

"Impressive - intonation dead-on, with a luscious tone and an Old World grace that you don't hear very much from young violinists anymore." - Los Angeles Times

Hadelich's refinement and excitement carry one through these very diverse works.