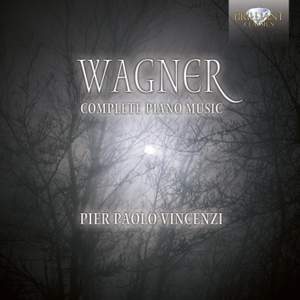 Today Richard Wagner is best known for his extraordinary operas; any success in other domains was dwarfed by these compositional feats in the world of musical theatre. But Wagner’s piano works can be seen to be just as important in understanding the evolution of his style and musical thought, and thus the development of this dominating figure of the 19th century.

The collection brings together Wagner’s entire output for solo piano. The earliest sonata on the recording is the Piano Sonata in B flat, which shows evidence of Wagner’s music education, with much indebted to the Beethovian model as well as to the great pianist‐composers Weber and Pleyel. These influences are heard again in the more mature and complex Große Sonate – a work that Wagner intended to turn into a symphony, though this attempt was later abandoned.

A regular dedicatee of Wagner’s works was Mathilde Wesendock – the relationship between the two is still much debated today – and among the works in this collection, three are dedicated to Mathilde: the ‘masterpiece’ Eine Sonate für das Album von Frau Mathilde Wesendock, Notenbrief für Mathilde Wesendonck and the ‘Schluß zum Vorspiel’ from Tristan und Isolde. The ‘Tristan chord’ at the beginning of the latter has become considered a clear attestation of Wagner’s infatuation with Mathilde. for whom he stopped work on the Ring cycle to begin that great testament of love, Tristan und Isolde.

The works are performed by the Italian pianist Pier Paolo Vincenzi, whose busy concert schedule takes him all over his native country. He is joined for the Polonaise for 4 hands in D by Federica Ferrati.