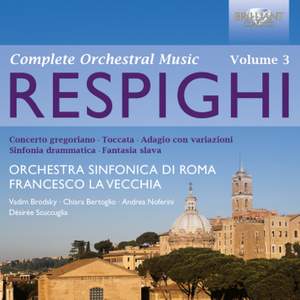 Respighi: Toccata for Piano and Orchestra

Ottorino Respighi’s quest to create his own musical style led him to the conflict of wider European tradition and the roots of Italian music. Several of the works in this collection show the influence of the former: Fantasia slava contains Russian melodies and is written in the style of Rimsky‐Korsakov with whom Respighi studied, while the Adagio con variazioni includes elements of folk song, its mournful theme and variations for cello underpinned by orchestral colour.

The composer’s Sinfonia drammatica, a distinctly gloomy work of huge proportions, reflects the mood of Europe prior to the First World War. Respighi’s exploration of early Italian music is evident in the Concerto gregoriano, to which the influence of Gregorian chant adds a certain spirituality. The work, which combines the use of modal harmony and Respighi’s own creative idiom, showcases some of the composer’s most beautiful, and technically demanding, writing for solo violin (his own instrument).

Similarly, the masterpiece Toccata for pianoforte and orchestra owes much to early music, but is Neoclassical in structure. It includes the influence of organ repertoire – particularly that of Bach, as regards harmonic progression and direct quotations reminiscent of the Fantasia cromatica cadenza – and also Vivaldi and Frescobaldi. The works are played by the Orchestra Sinfonica di Roma, directed by Francesco La Vecchia, and feature astute readings by soloists Vadim Brodski, Andrea Noferini, Chiara Bertoglio and Désirée Scuccuglia.

An engaging follow‐up to the other two orchestral volumes in the series.

Contains extensive liner notes on the works and artist biographies in English and Italian.

I particularly enjoyed Andrea Noferini's impassioned, songful contribution in the 1921 Adagio con variazioni...this is a bold and colourful programme retailing at such an absurdly low price

[La Vecchia] conducts with energy and conviction throughout. The Rome orchestra responds enthusiastically, and the orchestral sound has plenty of colour and presence, with nice grip from the brass at the tuttis. A must for Respighi fans, and anyone wanting to explore this currently neglected composer.