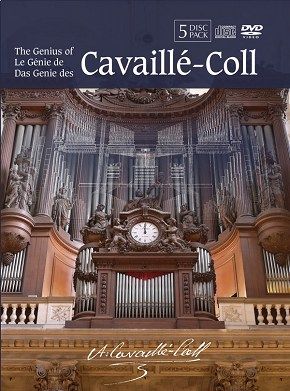 The Genius of Cavaillé-Coll

The Genius of Cavaillé-Coll is a triumph - a fascinating and captivating film of huge scope and ambition — BBC Music Magazine, April 2013, 5 out of 5 stars More…

Boëly: Fantasia and Fugue in B flat major, Op. 18

Aristide Cavaillé-Coll (1811 – 1899) built five-hundred revolutionary organs in France in the Nineteenth Century that inspired composers such as Franck and Widor to write the most famous and popular organ music ever composed. Filmed throughout France over nine months between 2011 and 2012, this magnificent boxed-set sums up Cavaillé-Coll’s extraordinary life and career. It contains:

- A brilliant 156-minute 3-part documentary about Cavaillé-Coll and his life and times. This set of films is made on a lavish scale and includes commentary by the best scholars.

- Superb recordings from his fifteen most important organs, featuring the best and most famous French organists.

- More than five hours of DVD extras including performances, improvisations and demonstrations of organs all recorded in full surround-sound.

This is the biggest ever crowd-funded classical music documentary, made with £80,000 raised by 1000 contributions ranging in size from £20 to £10,000. This stands poised to become one of the most important and popular releases about organ music ever made.

DVD2 The Organs of Cavaillé-Coll (Demonstrations and Music – 202 minutes)

The listener and viewer can savour Cavaille-Coll's poetic flutes and fiery reeds to their hearts' content, recorded and filmed to the highest standards. Among the finest performances is Michel Bouvard's sizzling account of the finale from Guilmant's First Sonata...For anyone interested in the development of the organ, this glorious box-set is an indispensable purchase.

It would be impossible to single out any component, musical, visual, or textual, within this amazing package which does not provide unmitigated delight...nobody with even a passing interest in the organ and nineteenth-century French organ music should miss the chance to own this remarkable release: it is a magnificent achievement!

I can unreservedly commend this magnificent production which so eloquently celebrates Cavaillé-Coll, and which lays before us such a glorious banquet of ravishing sounds and images.

It is hard to do justice to the story of Cavaillé-Coll, and no-one has come as close as a magnificent new release from Fugue State Films...No-one interested in organ music, or indeed in 19th-century French culture, can afford to ignore this release