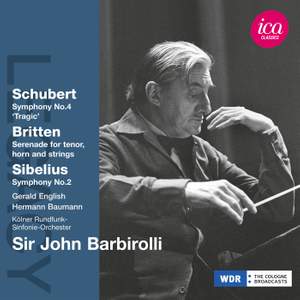 We don't think of Barbirolli as specially associated with Britten's music...His response to the Serenade for tenor, horn and strings's range of sounds and moods is memorable nonetheless...Sibelius's... — BBC Music Magazine, June 2013, More…

Sir John Barbirolli (1899–1970), born in London of Italian and French parentage, is remembered above all as conductor of the Hallé Orchestra in Manchester, which he helped save from dissolution in 1943 and conducted for the rest of his life. Earlier in his career he was Arturo Toscanini’s successor as music director of the New York Philharmonic, serving from 1936 to 1943. He was also chief conductor of the Houston Symphony from 1961 to 1967, and was a guest conductor of many other orchestras, including the BBC Symphony Orchestra, London Symphony Orchestra, the Philharmonia, the Berlin Philharmonic and the Vienna Philharmonic, with all of which he made recordings.

Both in the concert hall and on record, Barbirolli was particularly associated with the music of English composers such as Elgar, Delius and Vaughan Williams. His interpretations of other late-Romantic composers, such as Mahler and Sibelius, as well as of Classical and early-Romantic composers, including Schubert, are also very much admired.

These recordings have never been released on CD before.

They represent live accounts of music by composers with whom Barbirolli was very much associated, notably Schubert and Sibelius.

Barbirolli never recorded Britten’s Serenade for tenor, horn and strings, so the present release represents a new addition to his large discography. It features the wonderful singing of Gerald English, who was closely associated with Britten, and the great horn-playing of the German master Hermann Baumann.

The only other recording Barbirolli made of Schubert’s Symphony No.4 was with the New York Philharmonic in 1939, so this 1969 live performance with the KRSO in excellent stereo is essential for any collector in this great conductor’s work.

Even though Barbirolli made four studio recordings of the Sibelius Symphony No.2, this performance in Cologne is live and has extra adrenalin and excitement.

We don't think of Barbirolli as specially associated with Britten's music...His response to the Serenade for tenor, horn and strings's range of sounds and moods is memorable nonetheless...Sibelius's Second Symphony is here an exemplary display of how to generate an enthralling voltage-level from the podium without pulling the music about.

Nothing gives me greater pleasure when listening to these three CDs than Gerald English's performance of the Britten Serenade, his clarion, intelligently used tenor finding a perfect foil in Sir John Barbirolli's warmly phrased account of the orchestral score.

the mixture of affection and drive in the performance [of the Schubert] makes for real pleasure...Gerald English sings with great subtlety, ease in the upper register, clear diction and an understanding of the music’s style...[the Sibelius] remains a performance that any admirer of the conductor will want to hear.

The rarity here is a compelling performance of Britten’s Serenade...[English's] vocal timbre is clear, well-enunciated and youthful, contrasting with Barbirolli’s weighty, autumnal take on the piece...Barbirolli’s defiantly trenchant, smouldering Schubert 4 is a guilty pleasure. Better still is the conductor’s final performance of a favourite work, Sibelius’s Symphony no 2. Craggy, expansive and heartfelt, this is a supremely enjoyable, moving experience.