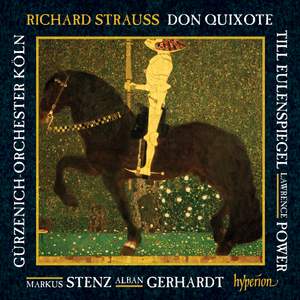 Stenz gets the proportions exactly right. He plunges us into the delirium of the melancholy hero's addled brain with a clarity pointing forward to Schoenberg's First Chamber Symphony...Adventurous... — BBC Music Magazine, May 2013, More…

Section 02. Don Quixote, the knight of the sorrowful countenance. Mäßig

Section 04. Variation 1: The adventures of the windmills. Gemächlich

Section 05. Variation 2: The battle with the sheep. Kriegerisch

Section 13. Variation 10: Duel with the knight of the shining moon. Viel breiter

Strauss’s ‘Fantastic variations on a theme of knightly character’, as Don Quixote is subtitled, is one of the composer’s most popular tone poems, principally because of the beautifully drawn central characters of the Don (performed by a solo cellist) and Sancho Panza (viola). These roles are luxuriously cast in this new recording, being taken by Hyperion artists Alban Gerhardt and Lawrence Power. The merry tale of Till Eulenspiegel completes this release.

The Gürzenich-Orchester Köln, the very orchestra which gave the premieres of both works in the 1890s, is conducted by Markus Stenz, who has held the position of Principal Conductor since 2003. He visited China with the orchestra in early 2008 and conducted their first ever BBC Prom at the Royal Albert Hall in August 2008. In September 2010 he returned to China with the Gürzenich Orchestra and the Opera of Cologne to conduct the first ever production of Wagner’s ‘Ring’ in Shanghai. Among other posts he is Chief Guest Conductor of the Hallé.

Stenz gets the proportions exactly right. He plunges us into the delirium of the melancholy hero's addled brain with a clarity pointing forward to Schoenberg's First Chamber Symphony...Adventurous Alban Gerhardt is vivid as Quixote takes several tumbles...The peerless viola player Laurence Power is luxury casting as an equally human Sancho Panza. No stars needed to be drafted in for one of the best Till Eulenspiegels on disc...an irrepressible performance.

pictorial points are in general well made; the scenes are colourfully set; and both Gerhardt and Power are such fine, sensitive and expressive musicians that they encapsulate the varied moods of their protagonists poignantly and purposefully. Markus Stenz attacks Till Eulenspiegel with vigour

an excellent account of Don Quixote. The catalogue isn’t exactly short of fine recordings but this one competes with the best. Gerhardt and Power are marvellous principals but they manage to project their characters splendidly while giving us a sense also that they are primus inter pares, as Strauss intended.

the playing here is first-rate, and Alban Gerhardt and Lawrence Power are vivid soloists.

Gerhardt and Power convey the complex nature of the relationship between the two...Stenz's conducting is all about the cumulative impact of small gestures rather than grand statements. We're conscious throughout of the classical form at the work's heart, though Stenz is also marvellous when it comes to those astonishing moments when the Don's fantasies assume a transcendent reality greater than anything on earth. It's nigh-on perfect.

[Power and Gerhardt are] both magnificent, and neither distorts the work's shape with excessive ego displays. This is a sublime, idiomatically phrased performance, given by the very orchestra which premiered the work. So you’d expect something special. The moments of quiet rapture are divine...The high points are too numerous to list