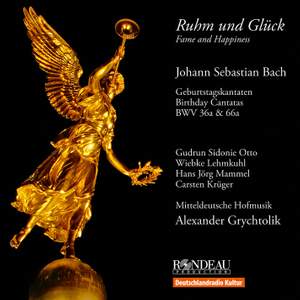 These reconstructions are no doubt a commendable exercise; but one has to wonder how much we really gain from hearing largely familiar music arranged to fit orphaned librettos. Nevertheless,... — International Record Review, July/August 2013 More…

Johann Sebastian Bach wrote the two birthday cantatas BWV 36a and 66a for the Köthen court in 1725 and 1718. Almost three-hundred years later, they were resounded again for the first time, in a reconstruction by Alexander Ferdinand Grychtolik. The present disc records the concert given at the Köthener Bachfesttage 2012.

As ‘Fürstlich-Köthenischer Kapellmeister’, Johann Sebastian Bach still had to provide music for special occasions at the Köthen court even after becoming cantor at St Thomas Leipzig in April 1723. He composed the cantata Steigt freudig in die Luft (BWV 36a) for the celebration of Princess Charlotte Friederike Amalie of Nassau Siegen’s birthday. He had already written the serenata Der Himmel dacht’ auf Anhalts Ruhm und Glück (BWV 66a) in 1718, during his time at Köthen, for the occasion of Prince Leopold’s birthday.

The present reconstructions of the two Köthen celebration cantatas, performed by the Mitteldeutsche Hofmusik on period instruments, demonstrate the works’ cultural historic value and ambition as artworks – despite being occasional pieces. The wishes brought forward in the birthday cantatas have, in fact, lost nothing of their relevance after almost 300 years: happiness, health, and a long life.

These reconstructions are no doubt a commendable exercise; but one has to wonder how much we really gain from hearing largely familiar music arranged to fit orphaned librettos. Nevertheless, on its own terms this is an enjoyable journey down some interesting Bach byways.