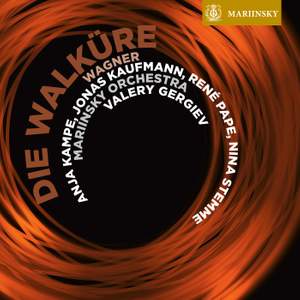 The result, in superb sound, is revelatory...[Kampe] gives Sieglinde both lyrical beauty and narrative power, well matched by Jonas Kaufmann's Siegmund...[Pape] turns out to be the finest [Wotan]... — BBC Music Magazine, May 2013, 5 out of 5 stars More…

Act I Prelude and Scene 1

In February 2013 the Mariinsky label launches its most ambitious project to date, releasing the first title in a cycle of Richard Wagner’s Der Ring des Nibelungen conducted by Valery Gergiev. Recorded in the sumptuous acoustic of the Mariinsky Concert Hall, the cycle features a sensational cast, helping create the most finely crafted Ring cycle of modern times.

The first release features Die Walküre, starring Anja Kampe, Jonas Kaufmann, René Pape, Nina Stemme, Mikhail Petrenko and Ekaterina Gubanova. Recorded during sessions and performances in 2011 and 2012, it will be released internationally in February 2013 in a 4-disc Super Audio CD box and as a high resolution download. This will be followed in September 2013 by the Das Rheingold (chronologically the first opera in the cycle, although originally envisaged as a prelude by Wagner) with Siegfried and Götterdämmerung completing the cycle in 2014.

Der Ring des Nibelungen was the pinnacle of Richard Wagner’s long and turbulent career and without question one of the greatest achievements in opera. Wagner wanted to create the perfect synthesis of music and drama and assumed total creative control of the project which was to take him 26 years to complete, with frequent interruptions. He introduced numerous innovations, not least the sheer scale of the project – typically a complete performance will last in excess of 15 hours, spread over four evening. No other opera matches the scale or ambition of the Ring. The Mariinsky Theatre has close connections with Wagner and his music. The composer conducted at the theatre and was even offered the post of Music Director. It is also believed to be the first place where any of the music from the Ring was performed. Since Valery Gergiev became Music Director of the Mariinsky, Wagner’s music has once again become a core part of the theatre’s repertoire, both in St Petersburg and on tour. The Mariinsky label’s recording of Wagner’s final opera Parsifal starring René Pape, Gary Lehmann and Violetta Urmana, was released in 2010 to international acclaim.

The result, in superb sound, is revelatory...[Kampe] gives Sieglinde both lyrical beauty and narrative power, well matched by Jonas Kaufmann's Siegmund...[Pape] turns out to be the finest [Wotan] I've heard lately...Most exciting of all is Nina Stemme's Brunnhilde, larger-voiced and steelier than one might expect, yet feminine, spirited and vulnerable... So far this recalls, and must rank with, the great Rings of the 1960s. More, please.

Wagnerites will not be disappointed...[Gergiev] he has imported what is arguably the best quartet of principals available today for this opera – Stemme’s classic Brünnhilde, Kampe’s exciting Sieglinde, Pape’s heavyweight Wotan and, yes, the peerless Kaufmann.

Stemme has the measure of her role in spades...Act 1 goes well from all three participants...Gubanova is a lively, probing Fricka and the Valkyries a well-saddled bunch. The still decidely un-Western sound of Gergiev and his orchestra is a dramatic advantage to this opera's tense underlay.

This show belongs to Jonas Kaufmann, whose bronzed timbre is deeply satisfying whether in heroic or intimate utterance. His legato is immaculate … Kaufmann sings as thrillingly as any Siegmund since Jon Vickers … the recorded sound is excellent.

it’s thrilling … If this instalment is anything to go by then this it’s going to be a Ring to cherish.

This has to be one of the finest Act Ones on record, due in no small part to Jonas Kaufmann’s Siegmund...Gergiev brings off the close of the act with such feverish eroticism that it’s virtually Not Safe For Work!..and what a debut [Stemme] makes here!...Pape has waited for a long time to take on Wotan and on this hearing he’s come to it at exactly the right moment.

Act I has Jonas Kaufmann’s heroic, poetic Siegmund at the peak of his powers, partnering a limpid, youthful-sounding Sieglinde in Anja Kampe — a dream pair of Wälsung twins for our time, and one to compare with the greatest on disc. Nina Stemme’s Brünnhilde, too, is a Valkyrie for the ages...She is one of the most complete and musical Brünnhildes ever recorded

In the first act at least, with Jonas Kaufmann as an incomparable Siegmund, Anja Kampe a profoundly moving Sieglinde and Gergiev pacing the performance to an overwhelming climax, the result is spellbinding...In fact, few performances on disc can match it for sheer excitement, or for Kaufmann's blend of easy power, immaculate diction and lyric beauty...a fine beginning to what promises to be a very worthwhile cycle.

Stemme, in particular, is a magnificent Brünnhilde, emphasising the humanity of a woman discovering the meaning of love rather than the fierce Amazon. She stands in powerful contrast to the awesomely implacable Wotan of René Pape...Jonas Kaufmann is a consummate Siegmund, and Ekaterina Gubanova makes a regally persuasive Fricka...[but] the result that the opera’s moral grandeur never registers

Gergiev’s conducting is rich in detail, taut with drama and yet managing to remain spacious – he really does resist the urge to rush, push the volume up and drown his singers...Pape’s Wotan is smooth and warm of tone...Stemme’s Brünnhilde is equally alert to dramatic detail.

[Stemme] is rock solid throughout her range, with gleaming top notes without any great wobble or sense of blasting the speakers...[Kaufmann's] baritonal timbre and almost smoky half tones make his Siegmund intensely masculine...The orchestral playing is excellent, especially lower woodwinds in solo passages, while the brass is superb...It is to be fervently hoped that Gergiev’s luxury casting stretches to the whole cycle.

Vocally Kaufmann is unmatched on record, a heroically dark tenor with ringing top notes. Kampe gives him a run for his money with full, rich tone and beautiful text work. Nina Stemme is a fine Brünnhilde, projecting the character’s emotional journey better than any of her current contemporaries