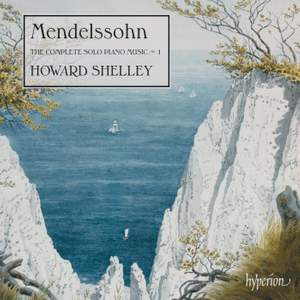 Technically, this is a tremendous disc. All the evidence tells us that Mendelssohn was something of a speed merchant and when...he asks for Presto, Shelley takes him at his word, with a fleetness... — BBC Music Magazine, April 2013, 3 out of 5 stars More…

No 2 in B minor. Mit heftiger Bewegung

No 4 in A major. Schnell und beweglich

No 5 in A major. Fuga, Ernst und mit steigender Lebhaftigkeit

No 6 in E minor. Sehnsüchtig

No 2 in A minor. Andante espressivo

No 3 in A major. Molto allegro e vivace

No 4 in A major. Moderato

Howard Shelley is acclaimed as the living master of early Romantic piano music. So much of this music was ignored throughout the twentieth century that there is still a sense of discovery at each new recording. Shelley here presents the first instalment of a six-volume set of Mendelssohn’s complete solo piano music—perhaps the least well-known part of the composer’s repertoire.

Mendelssohn composed or began nearly two hundred works for piano. Nevertheless, he saw only about seventy through the press, released in seventeen opera from the Capriccio Op 5 (1825) to the sixth volume of the Lieder ohne Worte Op 67 (1845). Some twenty-five additional pieces appeared posthumously in eleven additional opera. The remainder, whether fully drafted or fragmentary, were left to his musical estate or have disappeared.

Technically, this is a tremendous disc. All the evidence tells us that Mendelssohn was something of a speed merchant and when...he asks for Presto, Shelley takes him at his word, with a fleetness and control that command admiration, not to mention envy...I particularly like the sparsity of his pedalling, leaving the composer's lines to do their own work

Here, once more, is that immaculate, lightly pedalled brilliance, unfaltering stylistic assurance, warmth and flexibility. Few pianists could do more for music that too often suggests a composer going through predictable paces...Hyperion's sound and presentation complement Shelley's admirable performances.

the piano sonata in E, written by a boy in his mid teens, is a work of striking beauty and no little depth, a tribute to Beethoven that the latter would surely not have hesitated to perform. Howard Shelley gives an account that would have impressed both men, light-fingered and showing a dignified restraint in his pedalling.

it's good to see Howard Shelley embarking on a six-volume reappraisal of these works, so often seen as lacking the depth of Chopin and the fire of Liszt. Fans of fireworks won't be disappointed though...With playing of this quality this is going to be a series to treasure.