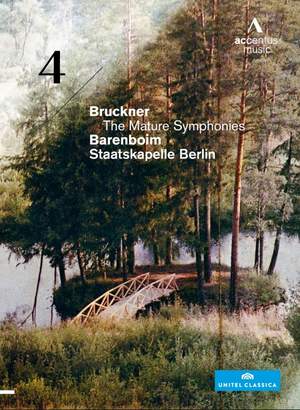 Bruckner: The Mature Symphonies (Symphony No. 4)

a reading entirely without frills or artificial drama: as well as its innate Romanticism Barenboim allows the underlying elemental nature of the music to emerge, and at times seems almost to... — BBC Music Magazine, May 2013, 5 out of 5 stars More…

Daniel Barenboim is an expert in exploiting the impact of cyclical performances of composers’ works: In this series he focuses his sharp intellect on all six of Anton Bruckner’s mature symphonies. Der Tagesspiegel described Barenboim's performance of the works with the Staatskapelle Berlin on six nearly consecutive evenings in June 2010 as a “superhuman” accomplishment and went on to praise how: “His Bruckner is conceived and performed very theatrically, like an opera without words.”

a reading entirely without frills or artificial drama: as well as its innate Romanticism Barenboim allows the underlying elemental nature of the music to emerge, and at times seems almost to let it play itself. He himself seems to radiate an inner stillness out of which the Symphony can grow...A moving and deeply satisfying performance to watch.

[Barenboim is] theatrical rather than devotional...The chief glory of the evening is surely the mellow thunderousness of an orchestra that has come into its own with Barenboim at the helm, as much a standard-bearer for older Austro-German norms as the maestro himself...String tone is dark and full, woodwind timbre strong, The horns, so important in this score, are on excellent form.

I found Barenboim’s conducting extraordinarily convincing. He moulds phrases with great care, though never obsessively, still less in any narcissistic way. Instead, what comes through in the way he shapes the music is his determination to present it in the best possible light...The camera-work on this DVD is conventional in the best sense in that the director presents a straightforward film of the concert