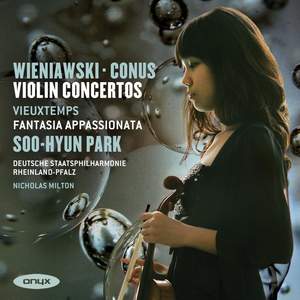 Vigorous playing in these Romantic showpieces, although greater tonal weight and focus is needed, especially in the lyrical moments — BBC Music Magazine, April 2013, 3 out of 5 stars More…

Soo-Hyun Park was unanimously awarded the Prix Groupe Edmond de Rothschild in January 2012, at the Sommets Musicaux de Gstaad. The prize offers the winner the opportunity to record their debut recording with an orchestra. Born in Seoul in 1989, Soo- Hyun Park began playing the violin at the age of seven. Since 1999 she has attended the masterclasses of Dora Schwarzberg at the Universität für Musik und darstellende Kunst in Vienna, where she also enjoys teaching. Her highly virtuosic programme includes Wieniawski’s passionate first concerto and a work once championed by Jascha Heifetz, the concerto by Julius Conus. Conus studied under Arensky and Taneyev and was a close friend of Rachmaninov from student days and through both composers’ time in the USA. Conus’s son married Rachmaninov’s daughter. His one major work is this highly effective and well-constructed showpiece for the violin. Vieuxtemps’ 'Fantasia appassionata' is a miniature concerto, with a passionate central movement and a fiendishly challenging ‘salterella’ finale. The composer was famous for his technical dexterity, and this work gives some idea of how phenomenal his technique must have been.

Soo-Hyun has performed in Europe as well as China and Korea. She has performed at the Mozartsaal of the Vienna Konzerthaus and in Tianjin with the city’s symphony orchestra in a concert broadcast live on both radio and television.

Vigorous playing in these Romantic showpieces, although greater tonal weight and focus is needed, especially in the lyrical moments

Soo-Hyun Park embraces all the challenges without turning a hair, and also contrives to give Wieniawski's passagework an expressive and poetic quality...Park's reflective approach to the Vieuxtemps results in a beautiful performance that's certainly not short of vivacity but maybe it doesn't capture the work's extrovert theatricality...The accompaniments, too, are excellent.