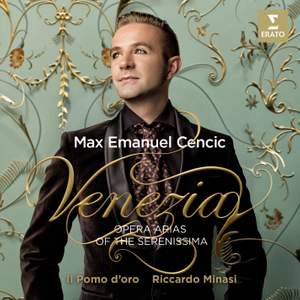 Venezia - Opera arias of the Serenissima

Cencic negotiates the vocal acrobatics of this repertoire effortlessy - his voice light and agile, his technique sure. But he is no mere showman, and responds to dramatic situations with singing... — BBC Music Magazine, May 2013, 5 out of 5 stars More…

Vivaldi: Anche in mezzo a perigliosa

“With these arias by Vivaldi and his lesser-known contemporaries I am hoping both to capture the musical tastes of Venice in the early 18th century and to recreate the moods and colours of a city that was open to the world. Venice was one of Europe’s most important musical centres, both exporting its operatic glories and importing new ideas from Rome and Naples.”

For today’s audiences, Vivaldi’s name exemplifies Venetian opera in the early 18th century – but he was not the only composer to shape the distinctive musical aesthetic of the great trading city known as La Serenissima. In this programme of arias by Vivaldi and his contemporaries, countertenor Max Emanuel Cencic further explores Venice’s contribution to world’s rich store of Baroque opera. His intention, in this first collaboration with Italian violinist/conductor Riccardo Minasi and his ensemble Il Pomo d’Oro, is to recreate Venetian taste and to trace the influences of the time, particularly as the city faced operatic innovations originating from Rome and Naples.

Cencic has been lauded for his assumption of the title role in Virgin Classics’ complete recording of Vivaldi’s Farnace, which Opera magazine felt “will set the standard for the foreseeable future ... Max Emanuel Cencic has all the necessary fire and fury for Farnace, with excellent coloratura singing and shows control in the more introspective numbers.” Gramophone meanwhile wrote that: “[Cencic's] brilliant coloratura is never merely showy, his poetic lament singing is superb...and his knack for portraying explosive vengefulness does not preclude intelligent musicality...this marvellous recording reveals that Vivaldi's theatrical fantasy is a journey worth taking.”

All the arias on Venezia are new to Cencic and, assembling a richly varied programme, he has sought out some exquisite rarities. Vivaldi is represented by several numbers, while other composers include the Venetians Albinoni, Caldara and Porta and two composers born elsewhere in Italy, but who became closely associated with Venice: Gasparini (born in Lucca), who employed Vivaldi at the Ospedale della Pietà and who became something of a mentor to him, and Giacomelli (born in Piacenza), whose style was very close to Vivaldi’s; his touching aria ‘Sposa, non mi conosci’ was ‘borrowed’ and transformed by Vivaldi into the celebrated ‘Sposa, son disprezzata’ from Bajazet.

Along with a fascinating exploration of the cross-currents of Venetian Baroque style, Cencic promises both virtuoso fireworks and gentle lyricism – and a collaboration with Minasi and Il Pomo d’Oro that will be ignited by the spark of spontaneity.

Cencic negotiates the vocal acrobatics of this repertoire effortlessy - his voice light and agile, his technique sure. But he is no mere showman, and responds to dramatic situations with singing that is by turns tender and seductive, fiery and furious, shaping and articulating melodic lines with a real sense of their poetry...Minasi directs some vibrant playing from Italian ensemble Il Pomo d'Oro, which really sing in the open, resonant acoustic.

Cencic and Il Pomo d'Oro both have a predilection for flamboyant gestures, so there is plenty of visceral energy in quick music...Minasi also allows slower music to breathe softly...Cencic is supremely talented at getting around fast coloratura passages...but reflective lyrical arias prove to be more memorable.

Cencic reveals here just why he is so suited to this; his voice is virtuosic but full of colour, his command of divisions sounds absolute, and his theatrical musicality is everywhere apparent.

If the Vivaldi items here seem generic, they are undoubtedly show stoppers. Yet it is the slow arias from forgotten operas by Giovanni Porta and Francesco Gasparini that show Cencic’s plush, beautifully integrated timbre and yearning, soulful expression at the height of his powers. Dazzling.

The fire and ferocity that he brought to the title role of Farnace are replicated in the first number...Cencic triumphantly displays the extent of his range, and in the aria as a whole his athleticism is lithe, his negotiation of the music’s pearly necklaces of coloratura absolutely secure.