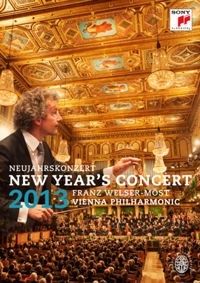 This New Year's Concert adds Verdi and Wagner, in their anniversary year, to a quite unusual selection of Straussian pieces, with Welser-Möst a fine, serious conductor. — BBC Music Magazine, May 2013, 5 out of 5 stars More…

"This was one of the most beautiful New Year's Concerts since Karajan and Kleiber. Franz Welser-Möst knows how the music of the Strauss-dynasty, the music of Lanner and Hellmesberger has to sound" Österreich on the 2011 NY Concert

Sony Classical is pleased to announce the release of the recording of one of the world’s most famous classical music events: the New Year’s Concert 2013 with the Vienna Philharmonic under the baton of celebrated conductor, Franz Welser-Möst. He returns to direct the 2013 celebrations after his acclaimed debut in 2011. Maestro Welser-Mőst is the former Music Director of the London Philharmonic Orchestra.

The annual New Year's Day Concert in the stunning Vienna Musikverein has been an exalted tradition for more than seven decades and the resulting recordings with works from the Strauss dynasty and their contemporaries are among the classical market's most important releases.

The concert will be broadcast on TV and radio to over 70 countries around the world with an estimate of more than 40 million viewers.

The programme traditionally revolves around waltzes and polkas by the Strauss family (Johann father and son as well as Josef and Eduard Strauss) whose music has enjoyed recent chart resurgence. The proven formula blends well-known classics with premieres of works that have never been performed before at the New Year´s Concert and the result is invariably both joyful and moving. The programme will remain a closely guarded secret until a few days before the event, but it can already be revealed that in 2013 the concert will include more premieres than ever before and probably some unexpected surprises. As is tradition, the concert will include the famous waltz The Blue Danube and the Radetzky March.

This New Year's Concert adds Verdi and Wagner, in their anniversary year, to a quite unusual selection of Straussian pieces, with Welser-Möst a fine, serious conductor.

Welser-Möst can cut a curiously professorial figure, but the playing he gets from the orchestra really sparkles in an offbeat programme that includes 11 New Year’s Day premieres