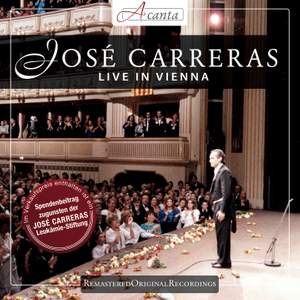 Legendary tenor José Carreras performed the evening of music recorded here at the Vienna State Opera in September 1988 as a musical “thank you” to all the Austrians who had supported him in his fight over the previous year against the potentially lethal condition of leukaemia. The pianist is at this very special concert was Vincenzo Scalera, and the repertoire encompasses Fauré, Massenet, Turina, Liszt, Puccini, Tosti and more.

Jose Carreras was diagnosed with leukaemia in 1987, and was only given a 10% chance of survival. However, as a result of an iron will, a positive outlook and good fortune, he gradually regained his health, and went on to produce the best selling series of “Three Tenors” recordings alongside Placido Domingo and Luciano Pavarotti. During 1988 he appeared in a series of comeback concerts including this one that took place on 16 September in Vienna.