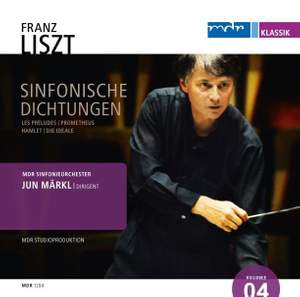 “As a composer and thinker, Franz Liszt exerted decisive influence on musical developments in the nineteenth century and opened many new doors. Liszt committed his improvisations to paper, creating new forms that enabled him to give musical expression to his fertile imagination. In the process, he broke the constraining moulds of the symphony and sonata and developed Berlioz’s idea of the symphonic poem. He took inspiration from literature, from a heroic figure of classical antiquity in Prometheus, from Shakespeare in Hamlet and from Lamartine’s idea that life is a prelude to that unknown song of which death intones the first solemn notes in Les Preludes. In the works entitled Die Ideale after Schiller, Liszt passes comment on contemporary issues by lamenting the loss of humanistic values, but reaches a positive conclusion at the end.

In striving to express the complexity of emotion in music, he made unprecedented technical and tonal demands on the musicians. The ominous beginning of Prometheus and the long drawn out introduction to Hemlet point far into the future.