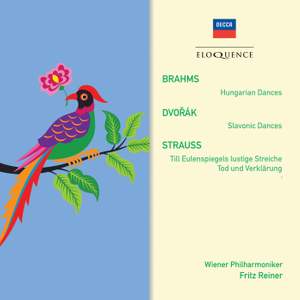 Brahms: Hungarian Dance No. 7 in A Major

Brahms: Hungarian Dance No. 19 in B minor

No.2 in E Minor (Allegretto grazioso)

Renowned for the precision of his execution, it was said that Reiner could ‘stand before an orchestra he has never seen before and conduct a new piece at first sight without verbal explanation, by means of manual technique alone’ (he later taught at the Curtis Institute, where he unsuccessful attempted to moderate the young Leonard Bernstein). His temper was equally legendary (he was once described as ‘A despot with a baton’), but his performances, perhaps because of his uncannily tiny beat, were models of clarity and precision, never losing sight of the longer line, and always renowned for their glittering vitality.

The recordings here are the sum of his orchestral recordings made for the Decca Record Company. His Strauss is searing, and the thrill of the Brahms and Dvorak Dances has perhaps never been equaled – helped immeasurably, of course, by Decca’s state-of-the-art recording.

Inexplicably divided into two short discs (previously one long one), these are ideally stylish and warm-hearted performances. The Strauss tone poems are highly charismatic.

I was bowled over by the splendour of the performances and gratified by the warmth and clarity of the recording … There is splendid ambience and range, a good stereo spread, clean definition and body. Both performances are immediately gripping: they are obviously of great distinction and I would go even further and say that they are inspired. Reiner was a Strauss conductor of quite exceptional insight and sympathy : his Tod und Verklärung seems to me the finest in the catalogue without exception and Till Eulenspiegel is certainly the equal of the finest both in terms of characterisation, orchestral playing and recording.

Reiner made many classic recordings of Strauss's music, and I think one of the best is this dramatic, fiery performance of Tod und Verklärung with the Vienna Philharmonic. With biting brass and radiant strings, it's an exhilarating experience.