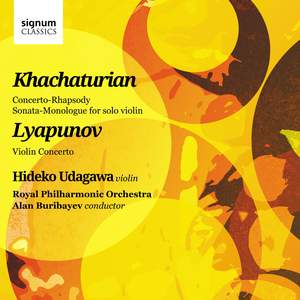 the [Lyapunov] concerto's rather grand manner suits Udagawa's noble style and steely tone wonderfully well. I prefer a warmer sound in Khachaturian, though there's no mistaking the commitment... — The Guardian, 10th January 2013, 4 out of 5 stars More…

Hideko Udagawa returns to disc on Signum with a new album of Russian Romantic music from Aram Khachaturian and Sergei Lyapunov.

The two composers represented here symbolise two entirely different eras in Russian music – Lyapunov from the end of the Romanov Empire and Khachaturian from the height of the Soviet Union – yet their works are perhaps more an expression of continuities, of perennial concerns for Russian composers, such as the need to integrate folkloric elements with the demands of sophisticated musical structures for concert performance, and adherence to the great Russian traditions of violin-playing that go back to the middle of the 19th century.

Ms. Udagawa is a renowned exponent of the Russian romantic tradition, and this disc follows two previous releases with Signum: Rachmaninov, Works for Piano and Violin (SIGCD164) and Romantic Novelties for Violin and Orchestra (SIGCD224).

the [Lyapunov] concerto's rather grand manner suits Udagawa's noble style and steely tone wonderfully well. I prefer a warmer sound in Khachaturian, though there's no mistaking the commitment and dexterity she brings to both works.