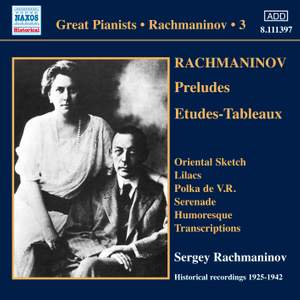 Wonders galore in Rachmaninov's playing, beyond its obvious historical importance. Cast-iron technique, proper old-school sense of line and tone colour, and an incomparable rubato. — BBC Music Magazine, May 2013, 5 out of 5 stars More…

Morceaux de fantaisie, Op. 3: No. 5. Serenade in B flat minor

No. 3 in E major: Allegro vivace

No. 6 in F minor: Allegro appassionato

Rachmaninov: Suite From Partita In E For Violin (after J S Bach)

This third volume of Rachmaninov’s Victor recordings contains discs he made of his own solo compositions and arrangements from the introduction of electrical recording in 1925 to a year before his death.

The works recorded were those most in demand by the public, each piece subject to Rachmaninov’s perfectionism and the version released always the best of a number of takes (for example, the recording of his famous Prelude in C sharp minor is Take 23).

Whether it be in the 1925 recording of his transcription of Kreisler’s Liebesfreud or the February 1942 recording of the same work (in which he displays a cast iron technique only a year before his death), the sheer virtuosity, utter clarity and supreme musicianship of Rachmaninov’s playing style are undiminished.

The first two releases in this series have been acclaimed for their superb remastering.

No composer or pianist has ever sounded more indelibly Russian, and never more so than in his own music...What clear relish and delight in the playful rather than melancholic capers of the Polka, what vitality and aplomb in the festive E major Prelude...this, the thrid volume of Naxos's 'Great Pianists' Rachmaninov, gives us playing beyond price.