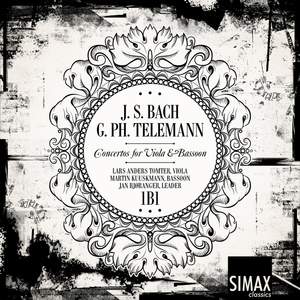 Bach, J S: Concerto in E-flat Major for Viola, Strings and Basso Continuo, reconstruction based on BWV 169, 49, 1053; I Allegro

Bach, J S: Concerto in D Minor for Bassoon, Strings and Basso Continuo, reconstruction based on the fragment BWV 1059; I Allegro

Telemann: Concerto in G Major for Viola, Strings and Basso Continuo; I Largo

Acclaimed Norwegian viola player Lars Anders Tomter is joined by bassoonist Martin Kuuskmann in their own ground-breaking arrangements of concertos by J. S. Bach. The disc also includes two concertos by Georg Philipp Telemann. The 1B1 Chamber Orchestra is directed by its leader Jan Bjøranger.

J.S. Bach wrote 14 concertos for harpsichord around 1740 in Leipzig. Although known today as works for keyboard soloists, in reality they are almost certainly arrangements of concertos for other instruments written as early as 1708. Continuing his pioneering work with the Mozart Clarinet Concerto and Clarinet Quintet in versions for viola (PSC1290), Lars Anders Tomter is joined by bassoonist Martin Kuuskmann in three concertos arranged from BWV169, 49 and 1053; 1059; and 1060. In addition to transcribing the solo concertos to fit their own instruments, they have also constructed a whole new piece based on fragments of other works. The disc also includes two concertos by Georg Philipp Telemann.

The chamber orchestra 1B1 is a string ensemble which was founded on the occasion of Stavanger's year as European Cultural Capital in 2008. It brings together musicians from the University of Stavanger and members of the Stavanger Symphony Orchestra. The group’s founder, leader, and artistic director is the violinist Jan Bjøranger. In its short existence 1B1 has already collaborated with some of the most important composers of our time, including Arvo Pärt and Steve Reich.

It all works well enough because this is great music and these are fine players. Lars Anders Tomter's rich, resonant and bouncy tone is obviously that of a modern viola, but though he threatens to overpower the orchestra in places he shows plenty of style and vim. Martin Kuuskmann is not always as nimble but he can make his instrument sing and yearn when necessary.