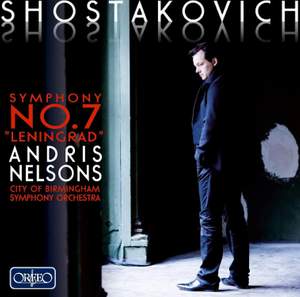 Nelsons and the CBSO propel the opening paragraph of the Symphony with tremendous energy and heroic determination, adopting a tempo that is perhaps a notch faster than Shostakovich's more measured... — BBC Music Magazine, March 2013, 4 out of 5 stars More…

Andris Nelsons has been familiar with the Russian and, more especially, the Soviet musical tradition practically since he began his training as a conductor – after all, he studied in St Petersburg with Alexander Titov and also with Mariss Jansons. His journey to Shostakovich and the Russian composer’s Seventh Symphony, which he recently conducted to great acclaim at the BBC Proms with the City of Birmingham Symphony Orchestra, is one that makes perfect sense in this context. Shostakovich’s symphonies continue to be at the mercy of commentators eager to find historical and political encodings in them, and yet a work like the 'Leningrad' Symphony has a universality for which the term 'war symphony' is wholly inadequate. The almost idyllic opening of the first movement and the disruption of that mood by the sudden irruption of a series of timpani rolls, together with the themes associated with a military attack, remain etched in the memory in spite of the final frenzy bound up with the idea of victory. The tradition of Shostakovich’s great Russian predecessors, especially Mussorgsky, enabled him to lend his voice to the tormented soul of a nation above and beyond all ideological divisions. It was passages like these that led to the rapid worldwide dissemination of this work once the microfilmed score had reached the United States after an adventurous journey via the Middle East. A new chapter in this exciting performance history of the symphony has now been written by the City of Birmingham Symphony Orchestra under its music director, Andris Nelsons, with a thrilling reading notable for its musical focus and depth and, not least, for its contrasts between rhythmic power and lyrical tenderness. The monumentality of Shostakovich’s Seventh Symphony emerges to particularly moving effect in a performance in which garish primary colours are banished in favour of balance.

Nelsons and the CBSO propel the opening paragraph of the Symphony with tremendous energy and heroic determination, adopting a tempo that is perhaps a notch faster than Shostakovich's more measured direction of Allegretto...there is some sensitive playing from the CBSO's wind section.

with Nelsons there is a strong reminder of Stravinsky in the acute sonorities, though Stravinsky at his most Russian. Nelsons is excellent at judging the music's momentum, a considerable problem in the first movement but which he helps to solve by allowing himself some flexibility in tempo, not always marked in the score but musically justified.