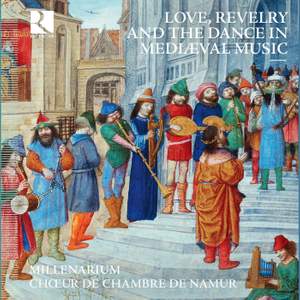 Love, Revelry and the Dance in mediaeval music

this is a good value and extraordinary box set....a monument to over a decade of empirical study music-making in a lost era — MusicWeb International, April 2013

The ensemble MILLENARIUM has recorded several discs for RICERCAR devoted to the secular monodic repertoire of the Middle Ages. These are brought together here to give a very complete view of the secular part of mediaeval music, at a time when the only religious music was Gregorian chant. Here are to be found the principal sources of this repertoire: songs of the troubadours and trouvères, tender or bawdy pieces from the famous Carmina Burana manuscript, and from the same anthology, the reconstruction of the Messe des joueurs. It was in that monodic tradition that the famous Llibre Vermell of the Abbey of Montserrat was also composed, bringing together the songs of the pilgrims of Santiago de Compostela.

The disc Danza is devoted to the little-known repertoire of mediaeval dance music and instrumental pieces that provoke an irresistible urge to dance! The album is completed by the remarkable recording of pieces for organetto made by the two founding members of Millenarium, Christophe Deslignes (organetto) and Thierry Gomar (percussion).

this is a good value and extraordinary box set....a monument to over a decade of empirical study music-making in a lost era