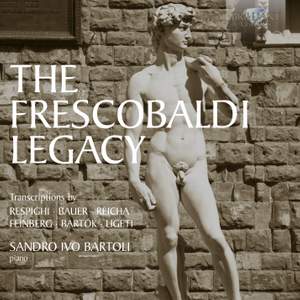 Respighi: Frescobaldi - Toccata and Fugue in A Minor, P. 113

Bauer, H: Great Composers of the Past

Great Composers of the Past: No. 3. Capriccio on the Cuckoo's Call (after G.A. Frescobaldi)

No. 9. Toccata in G Major (after G.A. Frescobaldi)

Renaissance master Girolamo Frescobaldi was a great innovator of the instrumental keyboard style, introducing various new techniques and “tricks”. His keyboard originality inspired many composers after him in giving homage to his creativity. This new CD brings together compositions inspired by Frescobaldi, diverse composers such as Reicha, Respighi, Bauer, Feinberg, Bartók and Ligeti, each in their own distinctive style.

Italian Sandro Ivo Bartoli, a pianist of colossal technical powers, specializes in rare and innovative repertoire, his Brilliant Classics recordings of Respighi Piano Concerto (BC_94055), the immense Fantasia Contrappuntistica by Busoni, a pianistic tour de force (BC 94223) and the Liszt/Busoni arrangements (BC 94200) brought him great critical acclaim in the international press, resulting in 5 star reviews.

A worthy and original addendum to the Brilliant Classics Frescobaldi discography.