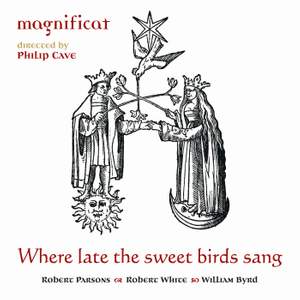 Where late the sweet birds sang

The subtle hues of the choir, an elite corps from Winchester Cathedrals, are particularly impressive in Byrd's Lamentation, a piece in which voicing gives the music its momentum. Yet the beauty... — BBC Music Magazine, January 2013, 4 out of 5 stars More…

Magnificat delivers once again; ‘Where late the sweet birds sang’ is a gorgeous contrapuntal choral collection of works by three of the leading Elizabethan composers, featuring some of the repertoire’s best singers.

Since the time of Byrd Westminster and Winchester Cathedrals have been renowned as two of England’s finest choral cathedrals.

The choristers on this recording, from Westminster and Winchester, maintain that lineage, their voices blending seamlessly and naturally.

The recording was made in St. George’s church in Chesterton, Cambridge which is of a similar scale to Waltham Abbey where Byrd was composing.

Byrd is increasingly recognised as a composer of great importance and ‘Where late the sweet birds sang’ will show that White and Parsons are equally exciting and deserving of renewed attention.

Magnificat are one of the world’s premier vocal ensembles whose recordings have met with huge critical acclaim: Thomas Tallis’ Spem in alium was hailed as ‘quite the best recording’ by Gramophone Magazine and was First Choice in Building A Library on BBC Radio 3's CD Review. In addition their recording of Victoria’s Officium Defunctorum was named Critics’ Choice by Gramophone Magazine and chosen by The Rough Guide as one of its 100 Essential Classical CDs.

The subtle hues of the choir, an elite corps from Winchester Cathedrals, are particularly impressive in Byrd's Lamentation, a piece in which voicing gives the music its momentum. Yet the beauty of this choir is, ironically, its greatest weakness.

There is such precision and care paid to the progress of the music and its phrases that you can almost see Philip Cave placing each note carefully, exactly where he wants it. That's not to say Magnificat's sound is in any way bland in its meticulousness - far from it. The blend and ensemble of the voices is beyond reproach.

The sober packaging of this disc gives little indication of the pleasure within. Pass it over at your peril...the long lines of intertwining and unfolding polyphony, performed with warmth and purity, is the reason to buy this inspirational CD.