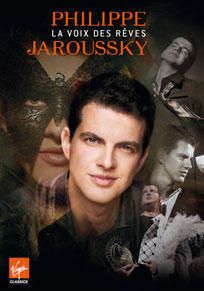 Philippe Jaroussky, described by Germany’s Die Zeit as “the Apollo of countertenors’, stands out among his many talented contemporaries as much for the soprano-like beauty of his tone as for the elegance and insight of his interpretations and his adventurous and erudite approach to repertoire – whether unearthing neglected scores by little-known composers or venturing beyond the Baroque into the 19th and 20th centuries.

Established as one of Virgin Classics’ bestselling artists, Jaroussky, now aged 34, has been honoured three times in the Victoires de la Musique awards in his native France and has also received Germany’s most prominent music prize, the Echo Klassik. His diverse achievements are saluted in two new collections on Virgin Classics – the 2CD set “The Voice” and the DVD and Blu Ray “La Voix des rêves: Greatest moments in Concert”.

“LA VOIX DES RÊVES - Greatest Moments in Concert” (available on DVD & Blu Ray) features video footage from a number of occasions and venues – including items from a concert given among the crystal chandeliers of the splendid Galerie des Glaces in the palace of Versailles, and works by Handel and Vivaldi performed in another jewel of French Baroque architecture, the sumptuously decorated Chapelle de la Trinité in Lyon. Also included are exclusive interviews an array of fellow musicians: Jean-Christophe Spinosi, Emmanuelle Haïm, Christina Pluhar; Jérôme Ducros, Quatuor Ebène, Gautier Capuçon, Marie-Nicole Lemieux and Renaud Capuçon.

Jaroussky and his appeal were aptly summarised in a recent profile in the French magazine Balthazar: “Philippe Jaroussky alternates between opera and recitals, bringing his sensual, graceful voice and matinee idol looks, and this has made him a key star of classical music. But his recordings also reveal a skilled musicologist who has revived numerous forgotten artists like the castrato Carestini [and the composers] Johann Christian Bach and Caldara. Jaroussky simply glows. Anyone who has had the opportunity to meet him will find it hard to forget his enthusiastic conversation and his magnetic gaze.”

The singer made his passions clear in an interview with Crescendo magazine, revealing that “I don’t like being told I have the ‘voice of an angel’, because that would just mean that it sounds pretty and takes people out of themselves … I want to be able to evoke more human emotions too: sorrow, despair, jealousy.” Speaking to the leading French newspaper Le Monde, he went into more detail on his philosophy as a maturing singer: “Ten years into your career, you reach a certain level of purity in your approach. You are always set on improving – strengthening your high notes, your low notes, your projection or your expressivity – but you also accept what it means to be an artist.”