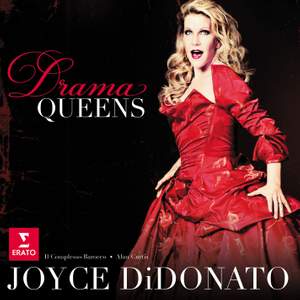 Royal Arias from the 17th and 18th Centuries

DiDonato and Alan Curtis...have unearthed some Baroque rarities. Instead of Handel's Berenice, we have Orlandini's Berenice, whose 'Da torbida procella' is an ideal fit for DiDonato's spitfire... — BBC Music Magazine, Christmas 2012, 4 out of 5 stars More…

Crowned with a Grammy Award for her last album, Diva, Divo, Joyce DiDonato joins conductor Alan Curtis and Il complesso barocco for Drama Queens, an electrifying programme of royal arias from the 17th and 18th centuries, composed by figures as famous as Handel and Vivaldi and as little known as Orlandini and Porta. As DiDonato says: “High drama, profound emotion, fearless vocal writing, time-stopping passages, historical significance and real discovery ... What more could I ask for?”

The impact achieved by Joyce DiDonato with her last Virgin Classics album, Diva, Divo, was summed up by her triumph at the 2012 Grammy Awards in February: victor in the Classical Vocal Solo category, the ‘Yankee Diva’ also became the first classical singer to perform live at the Grammy ceremony, receiving a standing ovation for her spectacular rendition of the final rondo from Rossini’s La Cenerentola.

Enterprising as ever, DiDonato now presents a new themed recital, conceived in partnership with Alan Curtis, who also conducted her Virgin Classic recordings of Handel’s Ariodante and Radamisto and her duet recital Amore e Gelosia with Patrizia Ciofi. Drama Queens sees DiDonato portraying a parade of royal personages in a diversity of challenging situations and extreme states of mind.

“For me, this is my most exciting recording project to date,” says Joyce DiDonato,” because it is everything I deeply adore about the world of opera: high drama, profound emotion, fearless vocal writing, time-stopping passages, historical significance and real discovery. What more could I ask for?

“I wanted to return to this genre of music I love so deeply: the free, mysterious, profoundly moving world of Baroque opera, but to do it in the grandest fashion – from the throne of royalty! Each of the characters is a queen (or a sorceress, which equals queen in this fantastical world) ... Well, we have allowed one princess, because the aria is completely unknown and it is simply too beautiful to be left out: ‘Madre diletta, abbracciami’ by Giovanni Porta [c1675-1755].

“What more could a singer ask for than to indulge in the antics of rage and bliss, despair and jubilation, heartbreak and true love?” she continues. “It will be an extraordinary journey, thanks to these larger-than-life characters, and I fully expect to learn a lot about myself along the way.”

Conductor and musicologist Alan Curtis explains that: “Our Drama Queens are a motley group. Our idea was to cultivate extremes, to gather arias that show larger-than-life emotions. They range from noble, but sultry seductiveness, through the hysterically happy to vindictive despair and royal rage. The musical styles are also as varied as possible.”

The arias range in period from the dawn of opera, Monteverdi and Cesti, to lesser-known works by Gluck and Haydn. “We also include some little-known music by Reinhard Keiser [1674-1739], notably an aria with an amazing five-part accompaniment for solo bassoons, without strings,” adds Curtis. (Joyce DiDonato describes it as “an aria of jealousy, suspicion and torment with the bassoon and voice chasing each other.”)

Alan Curtis continues: “Two flashy arias by Giuseppe Orlandini [1676-1760] come from an opera about the great Jewish Queen Berenice, thought to be lost, but found in a California library ... But we have not totally excluded well-known works either. There is Joyce's beloved ‘Sposa son disprezzata’, a YouTube favourite, which most people know in the version for Princess Irene, the rejected bride in Vivaldi's Tamerlano. But it was actually taken by Vivaldi from an earlier opera by Geminiano Giacomelli [1692-1740], where it was sung by a male character and performed by the famous castrato Farinelli. Another Farinelli aria we include comes from an early serenata by Hasse; he sang in drag as one of the greatest drama queens of all time – Cleopatra! And, of course, we include everybody's favourite Cleopatra aria: Handel's ‘Piangerò la sorte mia’, from Giulio Cesare.”

DiDonato and Alan Curtis...have unearthed some Baroque rarities. Instead of Handel's Berenice, we have Orlandini's Berenice, whose 'Da torbida procella' is an ideal fit for DiDonato's spitfire fioritura.

In the slow-moving 'Lasciami pinagere' .DiDonato's timbre is at its most beautiful, her phrasing eloquent, the trills not distracting the smooth flow of the musical line...The virtuosity needed to triumph over the swift scalework is coruscatingly supplied by DiDonato...Alan Curtis's Complesso Barocco's partnership is invaluable...This is a treasure of a disc, for the music, the orchestra and Joyce DiDonato.

an anthology of suitably impassioned royal roles from Baroque operas, their emotional scope ranging from the giddy flush of love evoked by her tremulous coloratura and swooning fades as Berenice in Orlandini's "Da torbida procella", to the self-sacrifice of Porta's Ifigenia, rendered with such poised nobility

Coloratura runs are lightning fast, angry declamations hurled like thunderbolts — and limpid laments meltingly cooed. I don’t like DiDonato when she gets too shouty or adds “expressive” pitch-bends. But it’s all compellingly theatrical. Great choice, too, with familiar Handel mingled with rare jewels