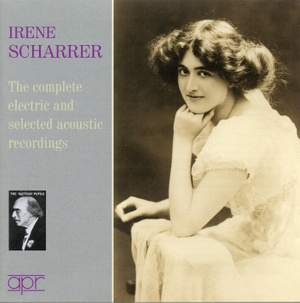 Her playing is a revelation and shows her to be a far more charismatic player than her distant cousin Harriet Cohen...What charm and brio, what joie de vivre! If the fingers sometimes run away... — Gramophone Magazine, November 2012 More…

IRENE SCHARRER, though perhaps the least remembered of the major Matthay pupils, was the earliest to record, beginning in 1909 at the age of 21.That in itself is a credit to her early fame, which she established through an extrovert, but always musical, virtuosity.

She excelled in such works as the Chopin Etudes, nine of which she recorded, and in other brilliant pieces such as those here by Scarlatti and Liszt, but the poise and refinement of her Chopin nocture or the slow movement of the Mozart sonata reveal another side to her playing that is sadly underrepresented on disc. Her final recording, of the Litolff Scherzo, was also her most famous; in its day it was a best seller and was responsible for putting that work on the musical map. This set reissues for the first time all Scharrer’s electrical recordings and also an example of every work she recorded in the acoustic era (pre 1925) that was not later remade as an electrical recording. For completeness, a discography of all her other acoustic recordings is also included.

Her playing is a revelation and shows her to be a far more charismatic player than her distant cousin Harriet Cohen...What charm and brio, what joie de vivre! If the fingers sometimes run away with themselves with an occasional loss of detail, who can possibly object in the face of such uninhibited, joyous bravura?...This is an invaluable release.