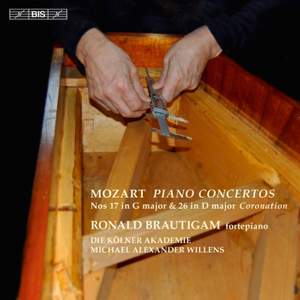 This is a really fine performance [of K453], with the slow movement's sublime interplay between piano and winds perfectly judged, and the wit and drama of the variation finale vividly handled... — BBC Music Magazine, January 2013, 4 out of 5 stars More…

Ronald Brautigam returns with the third instalment in his series of Mozart’s piano concertos and is joined again by Die Kölner Akademie conducted by Michael Alexander Willens.

The present disc includes Piano Concerto No.26 in D major, K 537, nicknamed the ‘Coronation Concerto’. Although the title page stated the work was ‘performed by the composer at Frankfurt-am-Main on the occasion of the Coronation of Emperor Leopold II’, the concert took place a week after the actual coronation, and was not part of the official festivities.

It is here preceded by Piano Concerto No.17 in G major, K 453, one of the rare concertos that Mozart composed with another soloist than himself in mind – in this case his student Barbara Ployer.

This is a really fine performance [of K453], with the slow movement's sublime interplay between piano and winds perfectly judged, and the wit and drama of the variation finale vividly handled - especially in the opera buffa coda, where you can almost smell the greasepaint.

Brautigam's sinuous reading of K453, which makes much of Mozart's long, lolloping lines, has elegance to spare. But he doesn't lose sight of the more mischievous elements either...[the fortepiano] has tremendous clarity throughout its range

His playing has energy, sparkle, grace and clarity - points are never laboured but there is real personality. The dialogue between the soloist and orchestra is effortlessly managed thanks to careful balance, and there's a feeling of joyous engagement throughout the performance...The SACD sound is superb: open, clear and always in focus