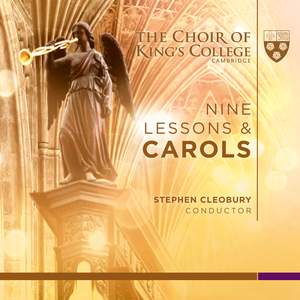 Perhaps the lower voices aren't quite as smoothly blended here as they usually are at King's, but generally the level of achievement reached in these live performances is enviable. — BBC Music Magazine, Christmas 2012, 4 out of 5 stars More…

trad.: A Virgin most pure

Tranchell: If ye would hear the angels sing

Dean, B: Now comes the dawn

Rutter: All bells in paradise

With a TV and radio audience of millions, the annual broadcast of carols from King’s College, Cambridge is an essential Christmas tradition for families all over the world. The debut album from the choir’s own label features a specially recorded performance of their glorious 'Festival of Nine Lessons & Carols', and includes many of the most well-known Christmas carols as well as new commissions from some of today’s most popular composers.

The Choir of King’s College, Cambridge is one of the world’s foremost choirs and unquestionably among the most widely heard. It owes its existence to King Henry VI, who envisaged the daily singing of services in his magnificent chapel. This remains the Choir’s raison d’être, and is an important part of the lives of its 16 choristers, who are educated at King’s College School, and the 14 choral scholars and two organ scholars, who study a variety of subjects in the College. The Choir has been a breeding ground for numerous professional singers, many of whom will appear on forthcoming recordings from the new label.

The Choir has a rich recording heritage, having appeared on many albums for both Decca and EMI Classics. The Choir’s recording of Rutter’s 'Gloria' has sold in excess of 100,000 units globally and its previous albums of Christmas music have sold in millions.

This double album faithfully recreates the magic of the Festival of Nine Lessons and Carols, opening with a lone treble singing 'Once in royal David’s city' and closing with a rousing chorus of 'Hark! the herald angels sing'. Each year, the Choir’s Director of Music Stephen Cleobury commissions a new carol, several of which are included on the album, including carols by Einojuhani Rautavaara, Gabriel Jackson, Brett Dean, Mark-Anthony Turnage, Dominic Muldowney and Tansy Davies. In addition, John Rutter was commissioned to write the new carol 'All bells in paradise' especially for this album.

Perhaps the lower voices aren't quite as smoothly blended here as they usually are at King's, but generally the level of achievement reached in these live performances is enviable.

The recording is full and warm, unmistakably that of King’s College Chapel. If anything is to melt my inner-Scrooge and promote a festive atmosphere, this two-disc release is probably it.

the quintessential Christmas service for many, and this year’s offering is a perfect blend of innovation and tradition. The centrepiece of their new disc (the first recording on the college’s own label) is a new carol by John Rutter – ‘All Bells In Paradise’, which is surely set to become a firm Christmas favourite.

[All bells in paradise is] vintage Rutter: an instantly likable melody supported by comforting mulled wine and mince pie harmony. It's sure to be a favourite with choirs up and down the country for many Christmases to come.

The service’s format appears set in stone, but Stephen Cleobury, the college’s long-serving director of music, isn’t resolutely stuck in the past. Not every newly commissioned carol lifts the spirit, but Dominic Muldowney’s Mary is eloquent; so, in its melodious way, is John Rutter’s new offering

Stephen Cleobury speaks exclusively to Presto Classical about John Rutter's All Bells in Paradise and the inaugural disc on King's College's new label.