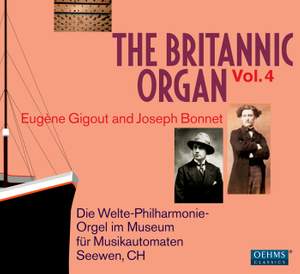 The Britannic Organ, Vol. 4: Eugene Gigout and Joseph Bonnet play their own works

Communion in B flat major

Oehms Classics continues this extravagant series with music by French composers on this volume IV of their Britannic Organ series.

The Museum für Musikautomaten in Seewen owes its existence to the passionate collector Dr. Heinrich Weiss (*1920).Weiss was able to purchase the museum’s Welte Philharmonie Organ – the so-called Brittanic Organ – for his collection in 1969. Some time later, he acquired music rolls from the Welte company as well as what is apparently the world’s only performance recording device made by the Welte Company that is still in existence. These three purchases from the Freiburg company Welte may be considered the culmination of Weiss’s collecting activities.

OehmsClassics continues this extravagantly crafted series with music by French composers. In November 2013, right in time for Richard Wagner year, a double-CD with compositions of the Bayreuth master will follow.