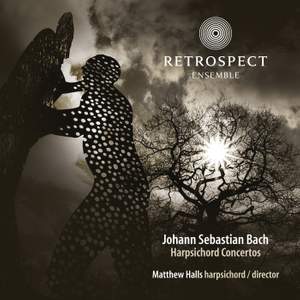 The choice of one-to-a-part strings, while not confirmed by hard contemporary evidence, would avoid crowding out the coffee-drinking clientele. But such lean forces also create transparent textures,... — BBC Music Magazine, December 2012, 5 out of 5 stars More…

Having wowed the critics with their 2011 recording of ‘JS Bach Easter and Ascension Oratorios’ Retrospect Ensemble return to the studio to record Bach’s Harpsichord Concertos.

Director Matthew Halls takes on the role of soloist, having proved both his keyboard virtuosity and affinity with Bach’s harpsichord music in his debut solo recording ‘J.S. Bach: Goldberg Variations’ which IRR named ‘Outstanding’.

In 2010 the 35-year-old was announced as The Oregon Bach Festival’s next artistic director, due to his ‘international reputation in the worlds of choral and early music [and] consummate skill as a Bach interpreter.’ He shall assume the role in 2013.

Retrospect has performed at concerts across Europe and the Far East and has established an exciting partnership with the Korean National Opera.

Matthew Halls has established himself as one of today’s leading young conductors. A former Artistic Director of The King’s Consort, he has conducted in prominent venues including the Concertgebouw, Amsterdam; the Cité de la Musique, Paris; and the Palais des Beaux Arts, Brussels.

The choice of one-to-a-part strings, while not confirmed by hard contemporary evidence, would avoid crowding out the coffee-drinking clientele. But such lean forces also create transparent textures, balancing perfectly with the harpsichord...Halls's sparkling articulation, even at quite moderate tempos, generates enormous exuberance

All in all, this is a recording that makes you sit up and listen, both for the verve of the ensemble playing and the range of colours and dynamics Halls produces, and for the sheer ear-popping brilliance of their chosen repertoire.

The brightness and rightness of the sound is what strikes you immediately...The harpsichord has tone and resonance, yet is not so closely miked that the strings sound like they have been banished to an outer realm; instead they have pleasing presence, offering a rich complementary texture in which you can hear every line...this is a joyful and invigorating release.

Halls directs the performances from the harpsichord, never dominating the tuttis, but exploiting a free-ranging fantasy in his stylishly decorated solo passages. The concertos sound pristine and revealed anew, like cleaned Old Master paintings. More, please.

This release fizzes with energy. I’ve long preferred hearing these concertos played on a modern piano. But listening to Matthew Halls’s harpsichord performances have made me completely reassess the music...Here, the music’s character is sparkier, more pugnacious. Halls’s exuberant solo line sparks and glitters, pitched against the Retrospect Ensemble’s immaculate, small-scale backing.