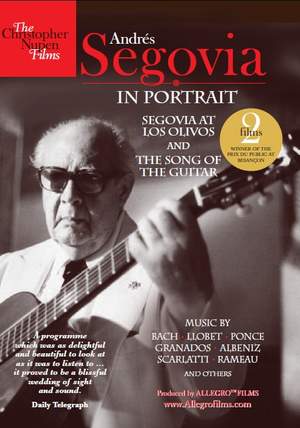 Segovia at Los Olivos & The Song of the Guitar

This is a re-release — in an improved version, and on our own label for the first time — one of our most important DVD titles, Andrés Segovia in Portrait.

It contains two very different films: Segovia at Los Olivos and Andrés Segovia: The Song of the Guitar. The first was shot in 1967, in what was, at that time, his newly built house, Los Olivos, on the Costa del Sol in southern Spain. The Grand Master was 75. The second was shot in Granada and the glorious Palaces of the Alhambra in 1976 when the maestro was 84.

In Segovia at Los Olivos, Segovia talks, in the relaxed atmosphere of his new home and in his inimitable Spanish way, about his objectives, his convictions, his career and his music. He plays pieces by Bach, Torroba, Llobet, Tarrega, Castelnuovo-Tedesco and Granados.

In The Song of the Guitar Segovia speaks, out of vision, except for a short statement near the beginning and he talks, not about his career and his achievements, but about his youth and the spirit in which he set out on his remarkable quest — a great artist in late maturity, reflecting on the genesis of his extraordinary journey. It is made as a poetic recollection of the atmosphere, rather than the facts, of his passionate beginnings — nearly 70 years earlier. Andrés Segovia was a poet in almost everything that he did.