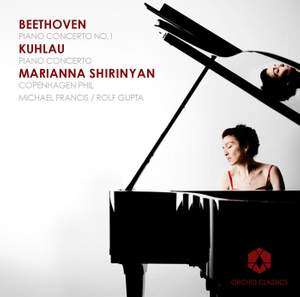 Kuhlau's infatuation with Beethoven's C major Concerto may be self-evident, but individual touches, emphasised by feisty playing from both soloist and orchestra, suggest a distinctive personality. — BBC Music Magazine, Christmas 2012, 4 out of 5 stars More…

Marianna Shirinyan, an Armenian pianist resident in Denmark, is one of this generation’s leading pianists, having won no less than five prizes at the ARD International Music Competition in 2006, and numerous prizes since then.

This brand new CD is the first in a series of Beethoven recordings being made by the ultra-exciting Copenhagen Phil, an orchestra that has recently displayed its commitment to bringing classical music to everyone with its zany and hugely enjoyable “flash mob” appearances in Copenhagen’s Central Station and Metro. Both flash mob videos have received more than three and a half million views on You Tube.

The orchestra uses historical brass instruments and timpani, less vibrato in the strings, and bases its interpretation on Beethoven’s original metronome markings.

Kuhlau's infatuation with Beethoven's C major Concerto may be self-evident, but individual touches, emphasised by feisty playing from both soloist and orchestra, suggest a distinctive personality.

Shirinyan isn't blessed with the most beautiful of instruments and some of the duetting with the wind could be more characterful but she makes a strong case for [the Kuhlau]...[in the Beethoven] Shirinyan's energy and the clarity of her fingerwork are infectious.

[Shirinyan] delivers fine performances and receives great support from the Copenhagen...This disc is a clever coupling and despite the obvious comparisons is worth having for at least that reason.