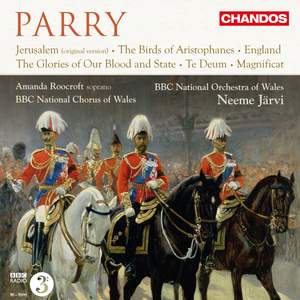 Foreword by HRH The Prince of Wales

This is breast-swelling stuff...the BBC National Orchestra of Wales gives warmly sympathetic renditions of music which was probably completely unfamiliar to them before the recording sessions.... — BBC Music Magazine, Christmas 2012, 4 out of 5 stars More…

The glorious company of the Apostles. Praise thee

When thou tookest upon thee to deliver man

Vouchsafe, O Lord. to keep us this day without sin

Parry: The Birds of Aristophanes

II. Entry of the Birds. Allegretto

Parry: The Glories of Our Blood and State

The glories of our blood and state

Some men with swords may reap the field

The garlands wither on your brow

With a foreword by the long-standing Parry enthusiast HRH The Prince of Wales, this release features orchestral and choral works spanning the length of Parry’s composing life, many of which are recorded here for the first time.

Parry is simultaneously one of Britain's best-known and least-known composers. Jerusalem (recorded here in Parry’s original orchestration) is almost a national hymn, regularly performed at rugby grounds, schools, Women's Institute meetings, and at the Last Night of the Proms. Yet until very recently few knew much about Sir Charles Hubert H. Parry, who in his day was described by Sir Edward Elgar as ‘the leader of art in this country’.

In 2010, HRH The Prince of Wales thrust Parry back into the limelight when in the BBC documentary The Prince and the Composer, he set out to discover more about the man behind the music, with the help of members of Parry's family, scholars, and performers. In April 2011, HRH once again placed Parry centre stage, as Jerusalem was performed at the Royal Wedding of his eldest son and daughter-in-law, The Duke and Duchess of Cambridge.

Several other pieces on this recording have strong ties to members the Royal Family. The Magnificat of 1897 was dedicated to Queen Victoria on her Diamond Jubilee, and the Te Deum was composed for the Coronation of George V in 1911. The orchestral suite from the incidental music to The Birds features the famous march which was played at the wedding of Her Majesty Queen Elizabeth II and Prince Philip, Duke of Edinburgh, and again as the processional march for the Queen’s arrival at the Royal Wedding in 2011.

Also on this disc is England, which was sung at the eightieth birthday concert of Sir Adrian Boult at the Royal Albert Hall in 1969.

The works are performed by the BBC National Chorus and Orchestra of Wales, with the soprano Amanda Roocroft, under Neeme Järvi who this year celebrates both his seventy-fifth birthday and an impressive thirty-year-long recording career with Chandos Records.

This is breast-swelling stuff...the BBC National Orchestra of Wales gives warmly sympathetic renditions of music which was probably completely unfamiliar to them before the recording sessions. The Chandos sound is excellent.

Altogether the disc represents one of the most important Parry issues for many years, a credit to all the performers, not least the warmly committed conductor, Neeme Jarvi, drawing the whole ensemble together. Warm, atmospheric sound too.

Though I feel the programme as a whole is a rather patchy representation of Parry, there's no doubt it's a valuable and timely addition to his discography. Järvi directs performances full of energy that sound entirely idiomatic, the orchestra responds with enthusiasm and the BBC National Chorus of Wales sings its collective heart out in the big moments.

This “heritage” release rewards close listening; a selection of choral and orchestral works by Sir Charles Parry mostly of outstanding merit, conducted by Neeme Järvi. Empty rhetoric is avoided, and much is mellifluously thoughtful...This is a CD well worth waving the flag for.