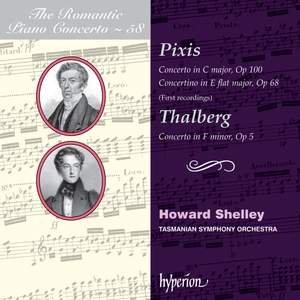 if the material remains unmemorable, the treatment is coruscating in its tireless elaboration...But what is surely unarguable is that neither Pixis or Thalberg could have rivalled Howard Shelley's... — Gramophone Magazine, December 2012 More…

Thalberg (who would be celebrating his 200th birthday in 2012) famously took part in a pianistic ‘duel’ with Liszt, and was popularly acclaimed as the greatest pianist in the world during his lifetime. He only wrote one piano concerto, and that in his teens, but it is a brilliantly effective showpiece for virtuosity and stamina, the pianist’s hands barely leaving the piano. Johann Peter Pixis has now been consigned—perhaps unfairly—to the oblivion where so many early 19th-century composers dwell. These are world premiere recordings of his charming Piano Concerto and Piano Concertino.

Howard Shelley, undisputed master of the music of the early Romantic period, directs the Tasmanian Symphony Orchestra from the keyboard with his usual insouciance and poise.

if the material remains unmemorable, the treatment is coruscating in its tireless elaboration...But what is surely unarguable is that neither Pixis or Thalberg could have rivalled Howard Shelley's immaculate taste and dexterity. Time and again he makes it difficult to imagine another pianist with such nonchalant ease and elegance.

Howard Shelley gives us fine performances. There's exquisite filigree in the Pixis, while the Thalberg has swagger and panache in spades.