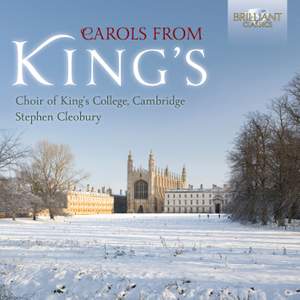 This re-issue is a great document of King’s College in the early 1990s and the selection can hardly be faulted. Certainly worth its modest cost; it gave me great enjoyment...A splendid selection... — MusicWeb International, November 2012 More…

trad.: Rejoice and be merry

“Carols from King’s“ - An all time Christmas favourite.

Each year the traditional TV broadcast of the Christmas Celebration from the King’s College, Cambridge by the world’s most famous boys choir, is watched by many millions around the globe.

Many of the Carols are part of the communal inheritance of Western church music: O Come All Ye Faithful, Once in Royal David’s City, Ding Dong, Merrily on High, The First Nowell and many more classics.

The Choir of King’s College, Cambridge, is one of the world’s best-known choral groups. Founded in the 15th century, it ranks among the oldest of its kind, and, while originally created for singing the daily services in the college chapel, now enjoys an international tour schedule that has seen it perform all over Europe and beyond. Every Christmas Eve, millions of people tune in to watch the choir’s A Festival of Nine Lessons and Carols from King’s – a service which has been continuously broadcast since 1928. Recorded in 1994, this reissue joins the group’s already extensive discography of Christmas music – recordings that have enhanced its worldwide fame and reputation. The compilation mixes some of the bestloved traditionals, including Once in royal David’s city and O Come all ye faithful, with more recent repertoire – such as Rutter’s rousing What Sweeter Music and Judith Weir’s striking Illuminare, Jerusalem (specially commissioned by the choir for its 1985 annual ser vice). Also featured are traditional German, French, Dutch and Polish carols (including two settings of Dulce Jubilo) – works which, together with Pärt’s enchanting Bogoróditse Dyévo, contribute to a wonderfully eclectic disc that provides over an hour of festive cheer.

This re-issue is a great document of King’s College in the early 1990s and the selection can hardly be faulted. Certainly worth its modest cost; it gave me great enjoyment...A splendid selection from the world famous choir, which will give much pleasure.