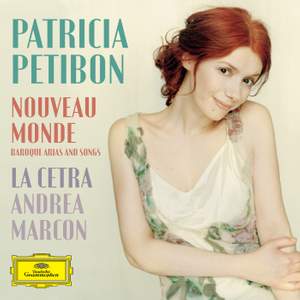 Conquest is one theme, confession another; the whole a breakneck A-Z of Baroque song from airs de cours to zarzuela. — BBC Music Magazine, Christmas 2012, 4 out of 5 stars More…

"Thy hand, Belinda...When I am laid in earth"

anon.: Greensleeves to a Ground

Greensleeves To A Ground - Arranged By La Cetra

Admired for her remarkable creative imagination and exemplary musicianship, soprano Patricia Petibon, in her newest album for Deutsche Grammophon, offers a treasure-trove of fascinating Baroque curiosities guaranteed to enthral both the Baroque aficionado and the casual listener.

Nouveau Monde is conceived as a journey from the Old to the New World, a spell-binding collection of arias, songs and pieces from European composers (Charpentier, Händel, Rameau, Purcell) that testify to their composers’ fascination with the exoticism of recently-discovered lands, as well as South American folksongs which boast exceptional rhythmic energy and colour

Spectacularly accompanied by the La Cetra Baroque Orchestra under the excelling direction of Andrea Marcon – who also stands out as a Baroque organist and harpsichordist - Patricia enchants our senses with a mélange of 17th-century arias and folk songs from England, France, Spain, and Latin America

As a follow-up to her best-selling Rosso and Melancolía albums, Patricia Petibon’s 2012 release is guaranteed to be one of the most popular and sought-after Baroque releases of the year

Conquest is one theme, confession another; the whole a breakneck A-Z of Baroque song from airs de cours to zarzuela.

'Nouveau Monde' is a tightly thought-through and arranged and compelling programme, a tour de force for its performer/compiler, most atmospherically recorded. Compulsive, repeatable listening.