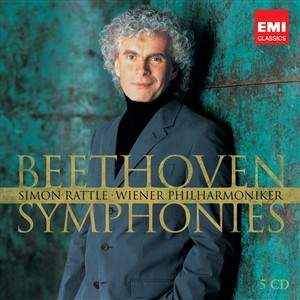 In May 2002, in a series of live concerts in the Golden Hall of Vienna's Musikverein, a journey unique in the Wiener Philharmoniker's long and distinguished history reached its conclusion. This thrilling set of symphonies is the fruit of that journey.

The recordings were made 'live' after numerous performances of individual symphonies and complete cycles in Tokyo, Berlin and Vienna. Rattle believes that a live performance has its own rhythm. The conductor 'channelling his unrelenting energy' was something audiences and the critics noticed at the concerts in the Musikverein. “Rattle left all landmark conductors behind him, as he unleashed then tamed, shaped, and painted the musical forces to be heard here...[Beethoven] certainly has his best advocate in Simon Rattle”, claimed Austria’s Standard after one of the recorded concerts.

“The well-known, often played and much-loved Beethoven classics are not just reeled off in expert routine,“ observed the Frankfurter Allgemeine Zeitung in 2001, “but are thought through and spontaneously rendered at the highest levels. The musicians react directly to the smallest gestures from their conductor. It's not often that one experiences such perfection.” The Berliner Morgenpost said of the cycle's character and capacity to excite: “Rattle goes for clear contours, for rhythm, dynamics and above all physical energy. He doesn't pay tribute to a genius transfigured and endowed with mythical status by 200 years of tradition but presents us instead with a Beethoven for today.”