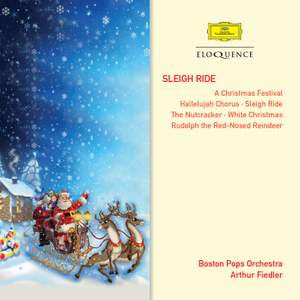 Dance of the Sugar-Plum Fairy

Dance of the Toy Flutes

Tchaikovsky: The Nutcracker: Waltz of the Flowers

Arthur Fiedler took great pride in bringing classical music to the world at large. While Leonard Bernstein was busy with his Young People’s Concerts with the New York Philharmonic, Fiedler and his Boston Pops Orchestra (most of the members drawn from the Boston Symphony) gave concerts of popular classics that became a fixture on America’s musical calendar. They made several recordings for Polydor / Deutsche Grammophon and the ever-popular Christmas disc is here reissued with built-in bonus tracks by Bach, Humperdinck and Tchaikovsky, in a sleigh ride, taking the listener from a delightful pot-pourri of carols (‘A Christmas Festival’) arranged by Leroy Anderson to Baroque hits in lush orchestrations to high-energy American Christmas songs – all arranged sumptuously for orchestra.