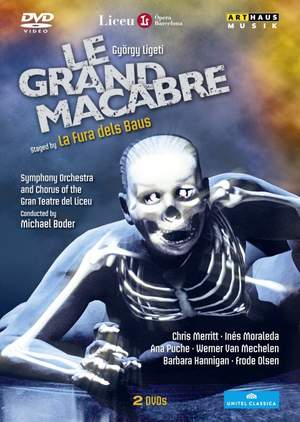 An international cast, chosen with the Liceu's normal skill, sing well and act to perfection the broad, superficial style that the directors require. Michael Boder and his orchestra seem to have... — Gramophone Magazine, January 2013 More…

Barcelona’s Grand Teatre del Liceu presents György Ligeti’s sole opera “Le grand macabre” in a stunningly imaginative and highly theatrical production by La Fura dels Baus - a production that already claimed enormous success in Brussels, London and Rome and - as the British Independent proclaimed - “only comes along once a decade”.

Ligeti’s (1923-2006) absurd-tragicomical masterpiece of the highest order blends popular theater, comics, pop art, cabaret, caricature and the Apocalypse with fascinating imaginativeness. The orchestra, for example, is enhanced with “instruments” such as car horns and doorbells. Ligeti himself – one of the great composers of the later 20th century – called his work an “anti-anti-opera.” Premiered in Stockholm in 1978, the work is based on a play by Michel de Ghelderode (1898-1962) and unfolds in an imaginary land inspired by the famous Dutch painter Pieter Brueghel the Elder: Nekrotzar, the Grand Macabre, announces the end of the world; but in a land ruled by eros, alcohol and corruption, his plan to unleash the Apocalypse bursts like a soap bubble. The people continue to lead their lives as before and refuse to be frightened by thoughts of death and a dark future… Masterfully rendering the colorful score is conductor Michael Boder and the orchestra and chorus of the Liceu. The top-notch cast includes Werner Van Mechelen as Nekrotzar, Chris Merritt as Piet the Pot, Barbara Hannigan as Chief of the secret police, and Brian Asawa as Prince Go-Go.

An international cast, chosen with the Liceu's normal skill, sing well and act to perfection the broad, superficial style that the directors require. Michael Boder and his orchestra seem to have the piece well sorted out. But there's too little feel in the production of an ensemble working together or of serious character investigation.