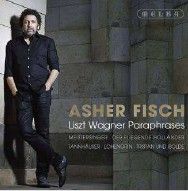 An interesting programme of seven of Liszt's Wagner paraphrases, and three Albumblätter by Wagner himself, but there's a matter-of-factness to the playing that works against this repertoire. — BBC Music Magazine, Christmas 2012, 3 out of 5 stars More…

A new album from Melba Recordings offers Wagner “unplugged”: favourite concert selections from the operas arranged by Franz Liszt for the piano. Asher Fisch is one of the most noted Wagnerian conductors today and he brings a symphonic sensibility and lyricism to these concert showpieces. His poetic readings of Liszt’s Wagner Paraphrases have been developed through an acclaimed career in the opera houses of Europe. These are deeply satisfying performances shot through with heartfelt musical insights, Fisch’s first piano solo recording.

Liszt’s paraphrases are more than mere transcriptions, they give heart and soul and expressive voice to the mighty originals, heightened by his own inimitable virtuosity. The selections recorded here include paraphrases on music from The Mastersingers of Nuremburg, The Flying Dutchman, Tannhauser, and Lohengrin, plus of course, the famous ‘Liebestod’ from Tristan and Isolde.

In these performances, Asher Fisch displays a depth of scholarship and understanding of historical context, uncovering hints of the changing and often highly charged relationship between the two great composers; Liszt’s hinting at the origin of the Tristan Chord or later disrespectfully thumbing his nose at Wagner with the addition of a virtuoso octave scale.

Fisch knows where all the bodies are buried in these scores, and just how to bring out the detail at its most vivid and vital.

Although not widely regarded as a composer of major works for piano, Wagner’s three exquisite miniatures that conclude this album show that, away from the opera house, he could craft music on a smaller scale that is both intimate and personal.

An interesting programme of seven of Liszt's Wagner paraphrases, and three Albumblätter by Wagner himself, but there's a matter-of-factness to the playing that works against this repertoire.

There's no lack of finesse and technical facility about Fisch's performances, but there's something perfunctory, almost approximate. Liszt composed the pieces as recital items, after all, recreating vocal lines and orchestral sonorities in pianistic terms, but Fisch seems determined to play down their element of showmanship.