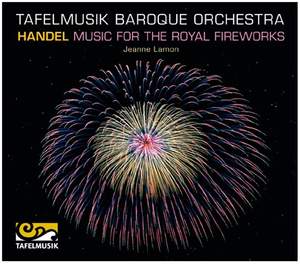 Handel: Music for the Royal Fireworks

George Frideric Handel (1686-1759) is regarded as one of the greatest composers of his time. Among his most enduring and popular works are two suites of instrumental music written for royal occasions: Water Music, and the first work presented on this recording, Music for the Royal Fireworks. The latter work was written as a commission from George II, as a celebration of the end of the War of the Austrian Succession and the signing of the Treaty of Aix-la-Chapelle in 1748. And what a celebration it was, attracting the largest audience that Handel’s music ever received during his lifetime.

The celebration of that incredible music continues to this day and this wonderful recording featuring Jeanne Lamon and the Tafelmusik Baroque Orchestra offers up a brilliant performance with its own fireworks and combines it with other, festive works, the Concerti a due Cori, Nos 1-3, HWV 331-334.