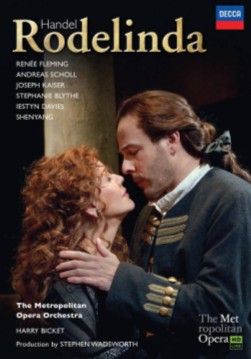 Renée Fleming and Andreas Scholl lead a superb cast in Stephen Wadsworth’s celebrated production of Handel’s Rodelinda from the Metropolitan Opera – based on the "Live in HD" transmission to cinemas worldwide.

The title role is unique in featuring no less than eight magnificent arias. Renée Fleming’s triumph in the first run of the production was hailed by The New York Times, "Ms Fleming draws on every resource of her artistry in this portrayal: luminous sound, exquisite ornamentation, floating high notes, emotional volatility."

Playing opposite her is Decca Classics countertenor star, Andreas Scholl, as King Bertarido, assumed dead, but returning to reclaim his throne and his queen.

The handsome period production sets the drama of public and private passion in the Milan of Handel’s own time – majestically presented in the set designs of Thomas Lynch and the lavish costumes of Martin Pakledinaz.

the orchestra delivers a nimble performance...Scholl's cool Bertarido and Iestyn Davies's mellifluous Unulfo make a pleasing contrast to Joseph Kaiser's splenetic Grimoaldo...Blythe displays handsome tones, while Shenyang sings the brutish role of Garibaldo with elan. Fleming, without whom none of this would be happening, is perplexing: an exquisite voice untroubled by consonants, mermaid-like in its dolorous beauty

Bicket coaxes the Met into a credible Baroque style...Iestyn Davies's intelligent singing and acting make Unulfo an especially likeable confidant to the heroic couple. Joseph Kaiser's acting of the sorrowful tyrant Grimoaldo undergoing a crisis of confidence ('Pastorello') is first-class...Wadsworth's amiable production comes to the boil nicely in acts 2 & 3.

Filmed at the Metropolitan Opera in 2011, this revival of Stephen Wadsworth's 2004 production must be one of the starriest Handel performances in recent years, with Renée Fleming as the titular heroine, Andreas Scholl as her husband Bertarido, the mighty dramatic mezzo Stephanie Blythe as Eduige, and Iestyn Davies (now an acclaimed Bertarido in his own right) as Unulfo. Harry Bicket conducts.

In this packaging of [Handel's] Rodelinda, the unfriendly size of the Met auditorium is neutralized...we can better appreciate the period theorbo and recorders that conductor Harry Bicket adds for flavoring in the pit. Via this medium, characters give every sign of communicating with one another, while the producer's agile camera focuses tightly on individual expressions...[Fleming] invests her high-speed passagework with convincing venom