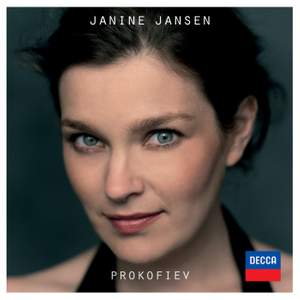 Jansen is the most subtle of interpreters, and always a sensitive partner. In the Second Violin Concerto, she keeps sentiment at bay...She responds cannily to Prokofiev's pared-back orchestral... — BBC Music Magazine, January 2013, 5 out of 5 stars More…

Janine Jansen has been a top-selling artist since her debut recording in 2004 for Decca sold 300,000 records. A major star in Europe, especially the Netherlands, Jansen has frequently topped the classical charts and featured in the pop charts.

For this release, Jansen is accompanied in the concerto by the London Philharmonic Orchestra under its Russian-born Principal Conductor Vladimir Jurowski. When she played the work with the LPO in London as part of its 2012 “Prokofiev: Man of the People?” festival, The Times hailed her as “a violinist who is right now on matchless form … a player that you follow wherever she leads”

Composed in the mid1930s, on the eve of his return to the USSR, Prokofiev’s much-loved Violin Concerto No.2 boasts the same accessible tunefulness and emotional directness as his enduringly popular ballet Romeo and Juliet, whose love music is ravishingly recalled in the soaring, songlike lyricism of the concerto’s slow central movement. For contrast the concerto is coupled with two chamber works conceived in the same decade: the stark yet expressive Sonata for Two Violins (1932) and the darkly tragic Violin Sonata No.1 (1938–46), which constitutes the composer’s covert memorial to those many friends and colleagues lost during Stalin’s Great Terror and the subsequent World War.

Jansen is the most subtle of interpreters, and always a sensitive partner. In the Second Violin Concerto, she keeps sentiment at bay...She responds cannily to Prokofiev's pared-back orchestral forces. This is not the usual patchwork of ideas, but an argument that Vladimir Jurowski keeps urgently on the move with the LPO soloists...Jansen's colleagues in the companion pieces are her equals, too.

This splendidly recorded performance of the Second Concerto accentuates its stark and sudden contrasts...In the Sonata for two violins, Jansen and Brovtsyn employ a wide range of tone colour, matching each other in expansiveness and virtuosity.

[Jurowski] judges the variety of weight and the palette of colour in the orchestral sonority ideally, and is ready with the essential instrumental dialogues with the soloist in the finale. The concerto is not exactly under-represented in the catalogue, but this penetrating, luminous and dynamic interpretation is one to linger over.

her silvery tone and searching musicianship ensure maximum intelligence and beauty...[Golan and Brovtsyn] play with Jansen as if joined at the hip. Whether the music’s fiery or delicate, this superb disc, gorgeously recorded, should give lasting pleasure.

this is an intelligent, challenging anthology, unafraid to show us Prokofiev’s underappreciated darker side. Beautifully recorded too.