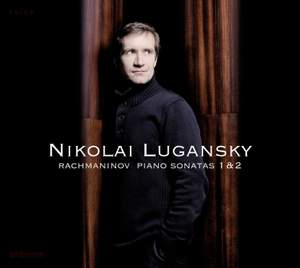 This is very exciting playing in two very taxing works...Lugansky produces plenty of fire and brimstone, but also creates a tender and refined sound...Even at its most aggressive, his playing... — BBC Music Magazine, January 2013, 5 out of 5 stars More…

Following his much-praised Liszt recital, released in 2011, this new recording is the second project on Naïve-Ambroisie from renowed Russian pianist Nikolai Lugansky.

Considered as one of the best performers of Rachmaninov in the world, Nikolai Lugansky is offering his very personal and accurate vision of the two piano sonatas of the composer. Both piano sonatas are monuments of the repertoire, with technical challenges and intense colours. Yet, composed 5 years apart, presenting a multitude of emotions and contrasts, they are significantly different works. Very few recordings already exist of the first sonata, that Rachmaninov intended to be a programme sonata based on the main characters of Goethe’s Faust.

In the coming weeks and months, Lugansky will perform Rachmaninov, in recital or concerto, in the main venues in Europe and North America.

This is very exciting playing in two very taxing works...Lugansky produces plenty of fire and brimstone, but also creates a tender and refined sound...Even at its most aggressive, his playing has a clarity and an utterly convincing sense of where every passage fits into the grand design. A really impressive disc.

If, like me, you feel that Rachmaninov's First Sonata doesn't quite stack up, Nikolai Lugansky's account may just cause you to have second thoughts...Lugansky's superb perofrmance is endorsed by the rich, full tone of the piano...Rachmaninov-playing of a very high order.

with playing of this authority and conviction, it comes very highly recommended

Nikolai Lugansky, widely regarded as one of the foremost interpreters of Rachmaninov alive today, gives committed and emotionally-charged performances of his two piano sonatas - providing a welcome outing for the rarely-heard No. 1.

As always with his Rachmaninov, Lugansky's playing balances grand gestures with an immaculate sense of detail. It's a combination that works particularly well with the overt drama of the First Sonata, where his subtle rhythmic and emotional inflections add immensely to the gathering tension. His performance of the Second is altogether more restrained: the limpidity of the slow movement is exquisite in the extreme.