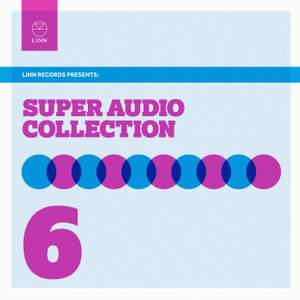 Byrd: Browning a5 (The leaves be green)

The sixth volume in the perpetually popular Linn Sampler series features an appealing selection of tracks from its catalogue of award-winning artists. ‘The Super Audio Collection Volume 6’ showcases the breadth of talent present in the Linn catalogue.

Claire Martin teams up with top jazz pianist Kenny Barron with a track from her Great American Songbook album, ‘Too Much in Love to Care’, which Jazz Journal described as ‘an outstanding album from one of the finest jazz singers in the world today.'

Robin Ticciati made his Linn recording debut with the SCO in a majestic programme of Berlioz which was named ‘CD of the Week’ by the Sunday Times and Classic FM and the Critics' Choice 'Sound of 2012' by The Independent.

Percussionist Kuniko and cellist Richard Tunnicliffe released critically acclaimed Linn debuts, the latter’s album of Bach Cello Suites was described by Gramophone as ‘probably the most appealing recording of these pieces.’

The Retrospect Trio’s recording of Purcell’s ‘Twelve Sonatas in Three Parts’ was described by Early Music Review as ‘The best recording of these works I have ever heard’ and was named an ‘Outstanding’ recording in IRR and shortlisted for a 2012 BBC Music Award.

The wealth of vocal talent in Linn’s catalogue is represented with tracks from the Dunedin Consort, the Prince Consort and the Classical Opera Company, who launched their complete Mozart opera series with ‘Apollo et Hyacinthus’ featuring soloists Lawrence Zazzo and Sophie Bevan.